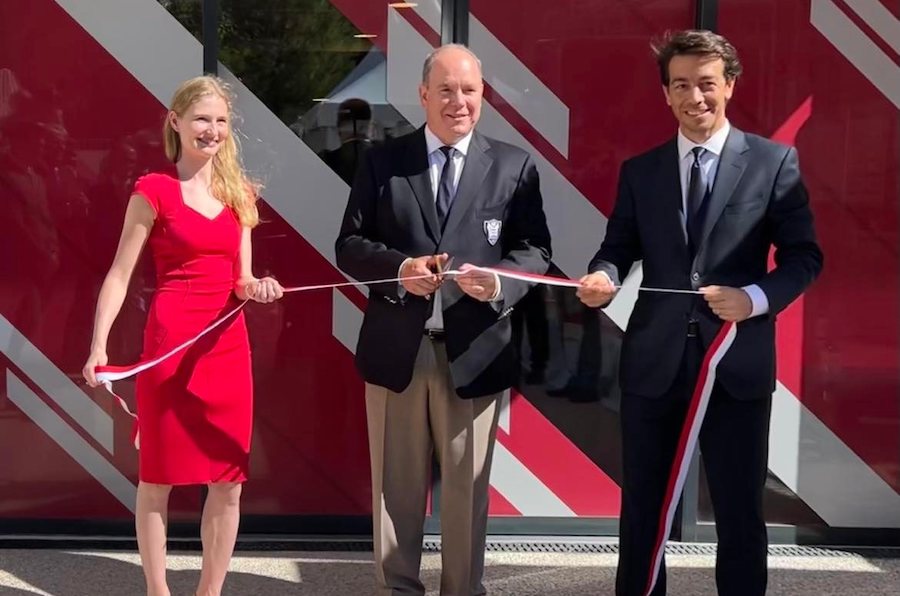 La Diagonale, AS Monaco’s academy training complex, was inaugurated on Thursday just days after the historic inauguration of the club’s performance centre in La Turbie.

Called ‘La Diagonale,’ the building, which houses AS Monaco’s academy, is located just a stone’s throw away from the Stade Louis II. The arches of the iconic stadium can be seen from the windows of the modern complex, and act as a visual reminder both for the young players, as well as the staff, as to why they carry out the work they do.

The building, situated in Cap d’Ail, was completed in 2020, but the Covid pandemic delayed its official inauguration, which happened on Thursday in the presence of Prince Albert II and Monaco CEO Jean-Emmanuel de Witt.

As de Witt told Monaco Life, the construction of La Diagonale, as well as the performance centre perched upon the hill that overlooks the Principality, are “inextricably linked.”

“This year we took the decision to create the ‘Elite Group’ rather than playing in National 2. Why did we do that? Because we want to reduce the gap between the young players and the professional players. The two infrastructures that you’ve seen this week, in the space of just a few days, work hand in hand,” said de Witt. “It [the construction of La Diagonale] fits completely into the club’s philosophy. We recruit players very, very early [scouting as young as 10 and recruiting from 13]. Then we train them in football, but also in Monégasque football. Every team has its style and so it’s very important, both in terms of values and in terms of football, that we can train them to develop within our professional squad in the future. That’s what we hope.”

Monaco are well-known as a formatory club, and so the new centre, which brings together all elements of day-to-day life under one roof, is important to withhold that image. However, the most important thing is the development of these players, not just as footballers, but as humans, as was stressed during Monaco Life’s tour of the facilities.

A gym, a swimming pool, a medical department, classrooms and accommodation are all on sight, minimising lost time through travelling between sites. As youth goalkeeper Alain Zadi, who has often trained with the club’s first team, told Monaco Life, “Everything we need is here.”

On an educational level, the academy is already producing stellar results, with the club maintaining a 100% success record in the baccalaureat three years on the trot. And the results are showing on the pitch. Benoît Badiashile, Eliot Matazo, Maghnes Akliouche and Soungoutou Magassa are just the latest in a long line of academy products that have gone on to lay for the club’s professional side.

La Diagonale allows the club to perpetuate the it’s philosophy of promoting and trusting young players, whilst also showcasing the best of Monégasuqe football and attracting the best youth to the club. That’s a winning combination, which the club hope will allow them to consolidate their position amongst the European elite and hunt for more silverware in the immediate, as well as the distant future.