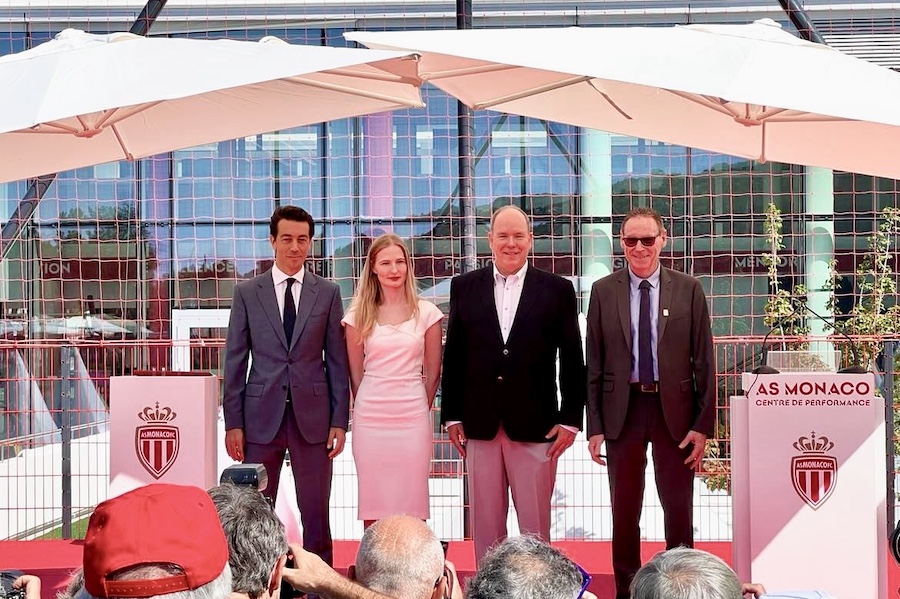 The stars descended on AS Monaco’s sparkling new training centre in La Turbie on Monday to celebrate the official completion of a project that began back in 2018.

Prince Albert II, Charles Leclerc, Didier Deschamps and many other stars of AS Monaco’s past and present were in attendance on a landmark day for the Principality’s football club.

Upon Dmitry Rybolovlev’s arrival at the club just over 10 years ago, he had the objective of creating the optimal conditions within which players could flourish and develop; 5th September 2022 marks the date of the completion of that key task.

As performance director James Bunce rightly said during a tour of the impressive facilities, which include two gyms (one of which is fitted with an anti-gravity treadmill), saunas, sleep pods and a swimming pool, “a modern football club needs modern facilities”.

The new training centre, which according to Monaco CEO Jean-Emmanuel de Witt cost around €60m, doesn’t just allow players to train in optimal conditions, it also facilitates the realisation of the club’s philosophy.

“This facility allows us to take the next step in our development, both individually as players but also as a club. We have one of the youngest clubs in Europe and a big history of developing young players, who move on to even greater things,” said Bunce.

Manager Philippe Clement also believes that the centre can help attract the best talent to the club. “It’s important to have installations like this in order to work, but also in order for transfers. All the players who come here are impressed,” he said.

Speaking during the inauguration, Prince Albert II said that the construction of the elite facility is a “strong signal from the club”, whilst sporting director Paul Mitchell told Monaco Life that the centre is “one of the most special in the world”.

Amongst all of the stars, including Ferrari driver Charles Leclerc, France manager Didier Deschamps and notable figures both past and present in Monaco’s footballing history, was a notable absence. Ekaterina Rybolovleva revealed that her father and president of AS Monaco, Dmitry Rybolovlev, couldn’t attend the event due to a “health worry”, but she relayed her father’s words.

“Monaco is a historic club, one of the most successful in French football. We have always had at our heart the idea of allowing the club to continue to develop in order to obtain the best possible results so that Monaco can continue to be not only one of the best in France, but also to shine on the European scene. Today, I expect that the team shows itself worthy of the confidence that we put in them. Monaco is a club with a rich and beautiful history that we respect and that we will continue to write together with our passion for football and with our desire to win,” she said.

As the club begins to write the next chapter in its long and illustrious history, it will do so in an optimal environment, which will give Monaco the best chance of ensuring that this next chapter is one of success.

Click on the gallery below to see more images of the new performance centre, photos courtesy AS Monaco…