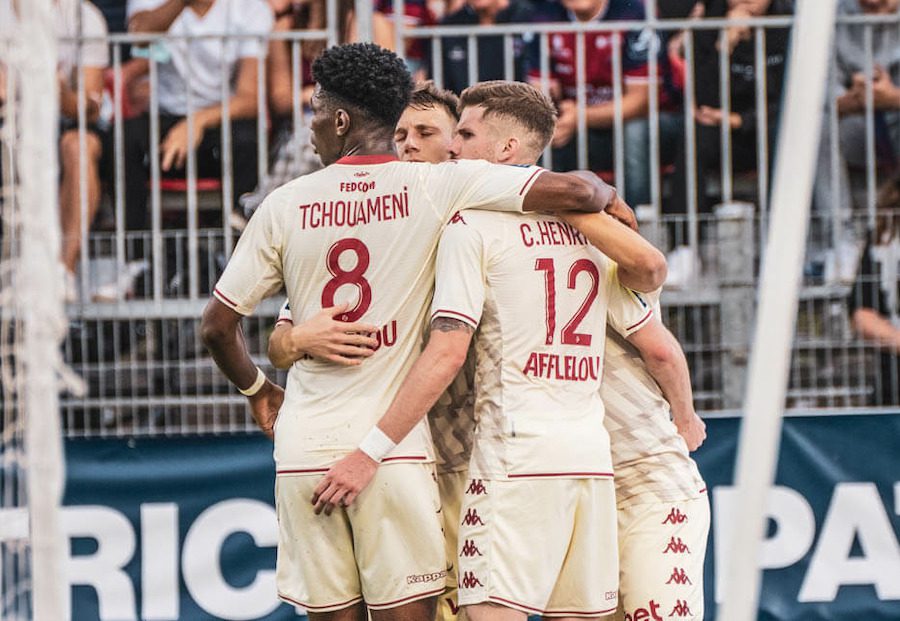 Monaco overcame an early setback against the newly-promoted Clermont Foot to secure a fourth consecutive victory in all competitions. The 3-1 win moves AC Monaco up to eighth position in the Ligue 1 table and level on points with last season’s champions Lille.
The newly-promoted Clermont Foot were buoyed by a raucous crowd at the Stade Gabriel Montpied, and they quickly took the lead through Mohamed Bayo – sweeping in a tantalising cross from Vital N’Simba to send the home crowd into raptures.
Monaco quickly dampened the mood as a composed Wissam Ben Yedder rounded the Clermont keeper and slotted home to restore parity, to net his fourth goal in three games. Clermont, however, continued to threaten and created a string of high-quality chances to retake the lead, the most clear-cut of which was spurned wastefully by Bayo.
After a disappointing first half, AS Monaco were quick out of the blocks in the second half and immediately took the lead through Kevin Volland, who finished off a neat Monaco move, having found himself completely unmarked within the opposition box.
AS Monaco and Clermont Foot then proceeded to miss guilt-edged chances, first Gedson failed to get on the end of a cross-goal pass from Diop, where any touch would certainly have put Monaco 3-1 up. Dossou then shot wide, having done well to manufacture space within the Monaco box, taking out two defenders and leaving only the goalkeeper to beat.
Clermont would rue that missed chance, as they struggled to create any more clear-cut opportunities, although Dossou, seeking to atone for his earlier miss, once more threatened with a well-hit drive, which stung the palms of Nübel in Monaco’s goal.
Sofiane Diop then rounded off the victory in injury-time, finishing off a well-worked counter-attack with a neat flick, which ought to have been saved by the Clermont goalkeeper. The three points take Monaco’s tally for the season to 11.
This was very much a game of two halves, and post-match, Coach Niko Kovac alluded to this admitting that, “I would say we managed to score the first goal in a way that we’ve become accustomed to doing, although I was not completely satisfied at this point in the match with the mood and attitude. The second half was a lot better in terms of both our play and motivation. It is very important to take this away from the match.”
Having secured an important three points, Kovac is now seeking to build upon his side’s recent success stating that, “An important week is looming with a trip to Real Sociedad and a visit from Bordeaux. We want to continue this run, continue to win.”