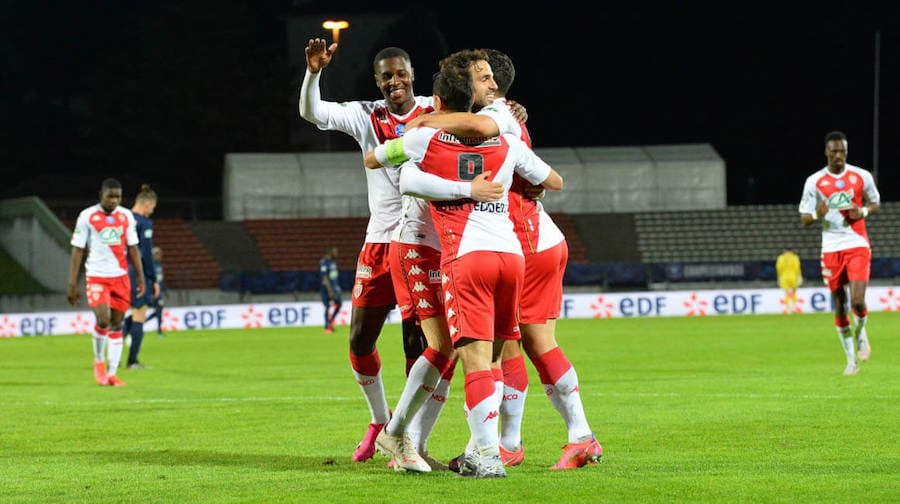 For the first time in 11 years, AS Monaco has made it to the Coupe de France finals after a 5 to 1 rout against Rumilly Vallières. They will now head to Stade de France to take on the mighty PSG.
Despite having a bit of a shock when their opponents, a valiant Rumilly Vallières team, opened scoring of the game 20 minutes in, the Red and Whites went on to dominate the rest of the Coupe de France semi-final match, winning them a shot to go up against Paris Saint-Germain for the finals.
The Alexi Peuget goal spurred Monaco to action and they came back with two back-to-back goals. The first was at 27 minutes in, when Rumilly Vallières’ Arthur Bozon made an accidental header into his own side after a cross from Fodé Ballo-Toure. This was followed by another header by Aurélien Tchouameni five minutes later assisted by Cesc Fàbregas, putting Monaco in the lead.
They never looked back from there. The incomparable Wissam Ben Yedder was up next, scoring at the 55 minute mark, followed by living legend Cesc Fabregas’s goal in the 78th minute. The final score came at 82 minutes in by Russian midfielder Aleksandr Golovin who sealed the deal quite nicely.
The crushing 5 to 1 victory went a long way to putting the Red and Whites in a winning frame of mind, but they still have more challenges to come.
“I think the most important thing is to take things game by game,” said Coach Niko Kovac. “Tonight, we needed a victory to maintain our good form and good humour in the squad. Qualifying tonight was the best solution to prepare for this match against Rennes.”
About making it into the Coupe de France after more than a decade, the coach was clearly delighted, saying, “I’m very happy to play in Paris and to have this chance to play in the final against a great team. We are here to win. At the start of the season, we wanted to get back to winning ways, to put AS Monaco back on top. We have already qualified for European competition, now we have a great opportunity to win a trophy.”
Whilst the excitement of the Coupe de France finals could certainly be distracting, the team is still battling for its place in Ligue 1. They go up against a determined Rennes team on Sunday night, where Monaco need to win to ensure they hold onto their third place spot in the league.
“A great match awaits us on Sunday against Stade Rennais where we will need a lot of concentration against a difficult opponent. I see that the players want to go as high as possible and keep growing and improving. I don’t want to stop them from dreaming. They are achieving great things and we must continue to work.”