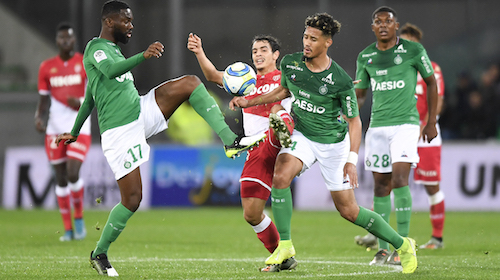 AS Monaco have lost their winning streak, going down 0-1 to Saint-Etienne on the weekend.

The goal that settled the game came just before the hour mark from a move that began with Jean-Eudes Aholou – on loan from Monaco – robbing Benjamin Henrichs inside the Saint-Etienne half of the field and starting a breakaway. The ball came to Romain Hamouma, whose shot was saved by Benjamin Lecomte but Bouanga was there to turn in the rebound (59′).

Saint-Etienne are now unbeaten in five games since Puel was appointed coach a month ago, and have claimed four 1-0 wins in their last five Ligue 1 Conforama outings. They are up to eighth in the table, just a point outside the top three, after this battling victory which owed much to an outstanding display from their young defenders William Saliba and Wesley Fofana as they shut out a previously prolific Monaco attack.

However, this game also hinged on the decision by referee Jerôme Brisard, following a VAR consultation, to overturn a red card shown to Fofana in the 72nd minute for a last-man challenge on substitute Jean-Kévin Augustin because of an extremely marginal offside in the build-up.

Monaco would have had a free-kick on the edge of the area and an extra man for the closing stages, but instead there was a reprieve for Fofana, and it was the visitors who ended the contest with 10 men. On as a substitute, Rubén Aguilar was shown a red card in added time for a last-man challenge on Bouanga as he bore down on goal. It was a second red card of the season for him, and a defeat for Monaco which ends their recent revival – they had claimed five wins in six games in league and cup before this encounter.

The Principality club’s coach, Leonardo Jardim, can point to the absences of key players. Tiémoué Bakayoko, Cesc Fabregas and, perhaps crucially and Islam Slimani were all missing. However, Saint-Etienne were without important members of their side too, including skipper Loïc Perrin and Yann M’Vila.

Bouanga came close twice for the hosts in the first half, when most of the clear chances fell to the away side. They saw Stéphane Ruffier deny Benjamin Henrichs early on, while Adrien Silva fizzed a long-range effort just past and Wissam Ben Yedder fired wide after being set up by Henrichs at the end of a lovely move.

Keita Baldé should have done better than head over from point-blank range after being teed up by Aleksandr Golovin shortly after half-time, and the only goal of the game followed not long after. Golovin and Silva then had chances to equalise for Monaco, but Saint-Etienne also might have added to their lead: Lecomte made one flying save from Hamouma shortly after Bouanga’s goal and then did well to keep out Ryad Boudebouz’s free-kick that came after Aguilar’s late red card.

The Gabon winger had most of the chances for Saint-Etienne before he opened the scoring, and he then provoked the foul by Aguilar which led to the Monaco player being sent off. It was another decisive contribution from a player who also netted the winning penalty in the recent win away at Girondins de Bordeaux.

Saint-Etienne are now unbeaten in seven games in all competitions, five under Puel. They have taken 13 points from the last 15 available in the league. Monaco dropped to 15th on 15 points.