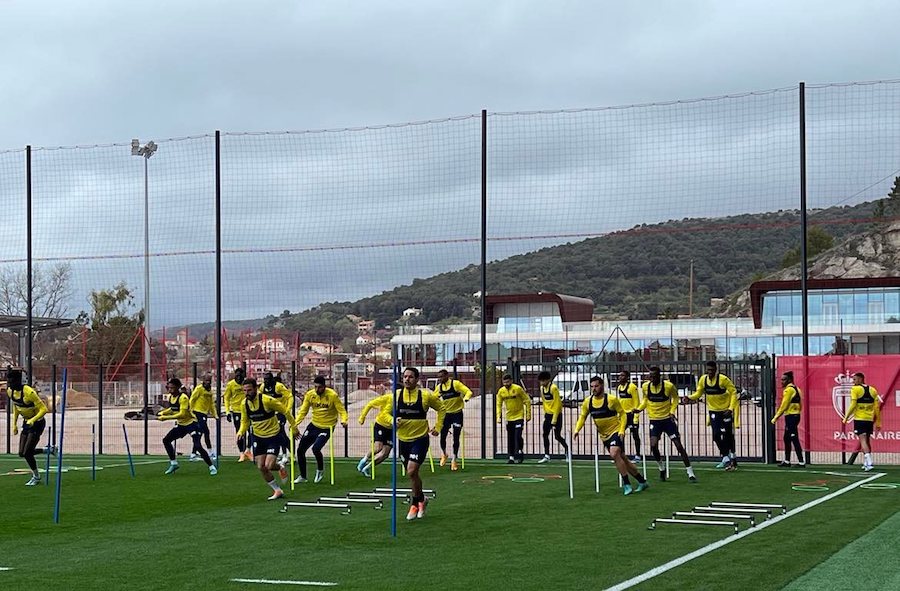 In Friday’s pre-match press conference, Monaco manager Philippe Clement played down the side’s “favourites” tag for the podium. Ahead of Saturday’s match against Saint Etienne, his sole interest is controlling the controllables.

With the short gap between games, it remains to be seen whether Clement will start the same side for the third time in-a-row. “I need to look now at the recuperation, because of that I can’t say who is the starting 11 for Saturday. I need to see the training, and see tomorrow how everyone is,” said the Belgian.

However, given Monaco’s strength in depth and their prolific record from the bench, Clement needn’t fear turning to his reinforcements. “In Ligue 1 and the top five leagues in Europe, we are the team that has the second most goals off the bench, from substitutes, just behind Atalanta. That only happens when every player is involved.”

Monaco Life attended group training on Friday and can confirm that although Cesc Fabreagas trained, he will not be in the group for Saturday’s fixture against Saint-Etienne, but will be involved for the N2 side at the Stade Louis II. Meanwhile, when questioned by Monaco Life as to whether Krepin Diatta would be available for selection again this season, Clement replied, “impossible”.

Monaco go into the fixture high on confidence, and rightly so. With five consecutive victories, they are the form side in Ligue 1, but when it comes to the “favourite for the podium” tag that has been attributed to the Principality side, Clement isn’t paying any attention to it. “What people think isn’t important. For me the important thing is to stay focused every match. Every month the favourites have changed. A few weeks back, everyone said that Rennes were already certain of the Champions League and now after two weeks that has changed.”

The former Club Brugge manager continued, “I just want to focus on ourselves, stay at a good level and take lots of points. That is what is in our hands.”

That has been Clement’s approach throughout, even during the difficult period in March, as defender Axel Disasi told Monaco Life.

“He has brought confidence. Even when things weren’t going our way, he was always confident, always motivated,” said the French defender. That confidence was well founded, and has spread through the rest of the squad, with remarkable improvements made by many members of what was an underperforming squad for periods of the season.

Monaco will travel to Le Chaudron confident of bringing home the three points, having seemingly broken their curse against low-blocking, relegation struggling sides. Undefeated in four out of their last five home games, Les Verts are still kicking in their fight to avoid the drop.

Now level on points with the current occupant of that much-coveted third-position, they may not be favourites to qualify for next season’s Champions League (at least according to Clement), but they certainly are the most experienced. At this point of the season, under an unrelenting and ever-increasing pressure, that fact cannot be understated.