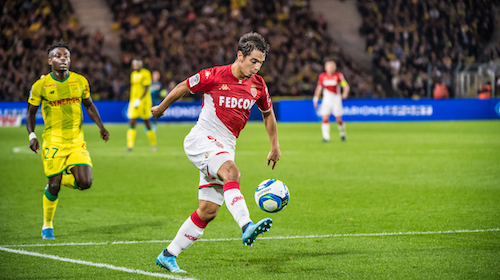 Prolific striker Wissam Ben Yedder grabbed his ninth goal of the season as Monaco handed Nantes their first home Ligue 1 defeat of the campaign on Friday.

Ben Yedder struck in the first half and had two more efforts ruled out for offside as Leonardo Jardim’s rejuvenated Monaco clinched a fourth win in their last five league outings.

They move into eighth place in the table while Nantes stay second, five points behind leaders Paris Saint Germain who take on bitter rivals Marseille on Sunday.

Nantes’ defeat ended their perfect record at home this season which had seen four successive 1-0 wins over Montpellier, Reims, Rennes and Nice.

“It’s important to win away from home for the first time this season,” said Jardim after Ben Yedder became the first Monaco player in 50 years to score nine goals in his first nine games in a season.

“Ben Yedder was always very effective at Toulouse and Sevilla. He is also in a better physical condition than at the beginning of the season.”

Ben Yedder grabbed the only goal after 22 minutes when he picked up a pass from Alexsandr Golovin, resisted a challenge from full-back Fabio before unleashing a fierce right foot drive into the roof of the net.

The French star thought he had a second just six minutes later when he found the target after an incisive pass from Algeria’s on-loan Islam Slimani.

However, Ben Yedder had strayed offside and the goal was ruled out.

Five minutes into the second half, Coulibaly was again unfortunate when his shot from a tight angle came back off the post of Lecomte.

On the hour mark, Ben Yedder had the ball in the net again but it was scrubbed off by VAR after Slimani was penalised in the build-up for offside.

The match against Nantes was the 188th in Ligue 1 for Leonardo Jardim – a record for a Portuguese coach in Ligue 1 Conforama.