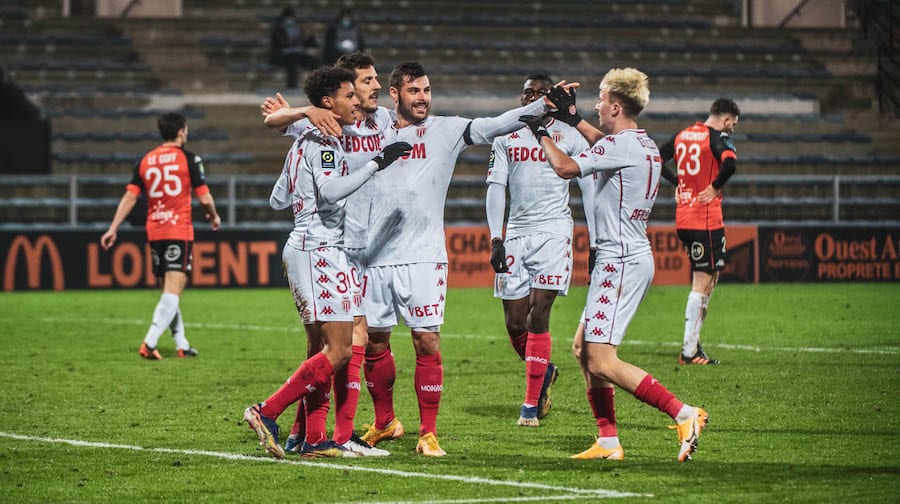 AS Monaco began 2021 on a high note, positively pummelling FC Lorient five to two at the opponent’s home turf.
The win on Wednesday night puts Monaco in sixth place in the Ligue 1 standings, inching ever closer to the top five, and only one point away from Marseille.
The match was balanced all through the first half with the opening goal going to Monaco as Axel Disasi made his third goal of the season. The next goal came at 32 minutes in when Les Merlus’ Terem Moffi fired a shot just under the bar evening up the score.
The teams went into halftime 1-1.
The real game began after the break, and more specifically when Aleksandr Golovin came onto the field. Within seconds, the Russian wonder made a fantastic shot from just outside the box giving Monaco a one point advantage. This score coupled with the post-halftime entries of Sofiane Diop and Guillermo Maripan on the pitch energised the Red and Whites.
“I laughed about it in the locker room after the game,” said Coach Niko Kovac after the game. “I don’t know if I’ve ever made such good substitution choices in my coaching career. They all contributed to the success.
“We are very happy to have Aleksandr Golovin back with us again. He came on and scored on the first ball he touched. We are very happy with his return, I’m sure he will raise the level of the team.”
But this goal was just the start. There was serious resistance from the opponents. Just minutes after Golovin’s play, they struck back with an Andrew Gravillon goal from a free kick diverted from Vito Mannone.
Monaco, as if not to be outdone, stepped it up a pace. Kevin Volland was the catalyst, receiving a pass from Maripan that he handily converted to a score, making three goals in the space of five minutes. The game came alive.
But for the Red and Whites, it was far from over. In the 78th minute, Diop scored with the help of Golovin and Volland, giving him his fifth goal of the season. Finally, in the final minute, Maripan scored from a deflection by Aurelien Tchouameni, ending the match with an impressive 5-2 win.
Monaco will see if they can keep the momentum going as they return home to Stade Louis II for a Saturday night match against Angers SCO.