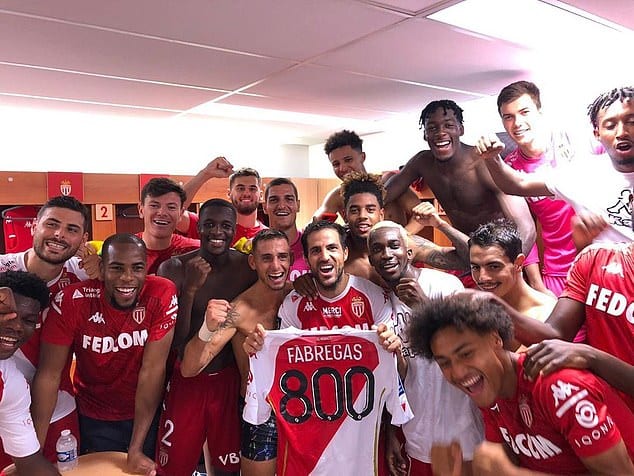 AS Monaco secured their 1,000th Ligue 1 win on Sunday in a 2-1 home match against Nantes.
Only three other clubs have surpassed 1,000 wins in the French Ligue 1 and now there is a fourth. AS Monaco joined the ranks with Marseilles (1,115), Bordeaux (1,057) and Saint-Etienne (1,044) with their win against Nantes on Sunday.
Team President Dmitry Rybolovlev looked on with pride as his team carried the victory. Sofiane Diop handed the Red and Whites an early lead which lasted until just after the hour mark when Nantes’s Ludovic Blas evened up the score. It was only a few minutes later, though, that Willem Geubbels knocked one between the posts, putting Monaco in the lead for the rest of the game.
The game also hit another milestone, this one more personal. Cesc Fabregas, the team’s 33-year-old midfielder, marked his 800th professional appearance and was celebrated by his teammates after the game who gave him a team shirt emblazoned with the number 800 on the back.
“800 games as a professional!! What an amazing victory from the team. Let’s keep it up!” Fabregas posted on his Instagram site.
Coach Niko Kovac, whose early record as new head coach sits at two wins and a draw, was complementary to the team, saying, “I want to say bravo to my team. It was a very difficult match for both teams. We had a lot of scoring opportunities, so I think the win is totally deserved. We created four or five big chances. I hope we can score a little more next time. But I think the fans enjoyed the way we played.”