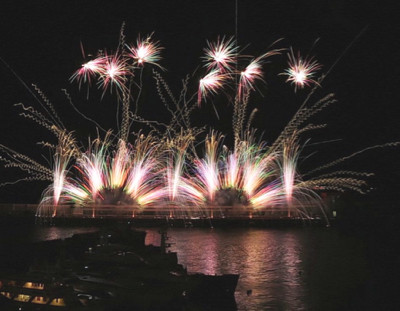 The International Competition of Fireworks reached its climax on Saturday, August 12, with a display from Australia, but it was the Austrians who won the contest.

Mayor Georges Marsan, surrounded by members of the jury, warmly praised the work of all the organisations for their technical and artistic prowess. Accompanied by his deputy, André J. Campana, President of the jury, he awarded first place to Steyrfire Austria, followed by Howard and Sons Pyrotechnics (Austrlia) and Arthur Rozzi Pyrotechnics (US). France’s 4 Pyragric picked up fourth place.

Following the traditional pattern of four shows, each representing a particular country, France opened the competition on July 22, followed by the Austrians on July 29, then the US on August 5 and finally Australia on Saturday.

Each show was evaluated according to strict scoring criteria ranging from pyro-musical design to final bouquet, through synchronisation, originality, choice of colours, choice of music – each criterion being rated from 0 to 10 points.

It was a difficult decision in the face of shows that have all shown great qualities, the judges said.

There’s still time for the general public to have a say with the opportunity to see or review each of the four shows online on www.monaco-feuxdartifice.mc. Viewers can then vote for their favourite. The firework team most favoured by the public will be awarded the Audience Award, which will be announced on Saturday, August 19 at midnight on the official website of the Competition.

Monaco the destination for the Red Bull X-Alps

Monaco’s musicians were welcomed in Monaco City Hall to celebrate the Feast of Saint Cecilia, which is celebrated in the Principality on the Sunday following National Day, November 19. A mass in the Cathedral preceded a procession through Monaco Ville of the Principality’s musicians.

It was during the fifth century that the popularity of Saint Cecilia began to develop in Rome, when her name appears in the prayers of the Mass. According to Don Lanciarez, a parish priest of Monaco in the eighteenth century, the Saint was the "patroness of musicians" in Monaco, but there is no documented evidence of a particular cult around the Saint.

A certain solemnity to the Feast was given in Monaco when the priest-composer Louis-Lazare Perruchot created the Choir of the Cathedral in 1930, and Sainte Cecilia remains the Patron Saint for the Principality's musicians and musicians.

A statuette commemorating the Saint by the artist Zagone sits at the corner of rue Emile de Loth and the Church.

Local News Staff Writer - December 31, 2017
A large boulder is blocking traffic on the Grande Corniche (RD 2564), in both directions, at Vista Palace in Roquebrune-Cap-Martin, Monaco-Matin reports. A detour along the RD 6007 and 51, via Roquebrune and Beausoleil, has been put in place indefinitely, until work can be completed to secure the cliff. The incident happened early Saturday morning along the Promenade de la 1re Division française libre, a small winding artery that leads to the Grande Corniche. According to the mayor of Roquebrune, Patrick Cesari, the double road closure is a preventive safety measure.