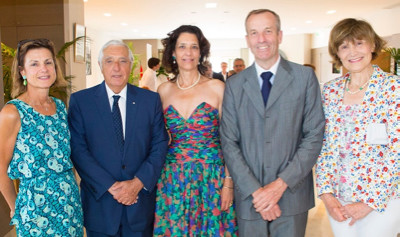 The British Association of Monaco (BAM) commemorated the Queen’s Official Birthday and her 65 years on the throne at a reception in the Salon Bellevue at the Café de Paris last week.

“I am delighted to see so many members and new guests from the British community joining the association to celebrate this wonderful occasion,” BAM President Vanessa Ilsley told Monaco Life.

Among those attending were Minister of the Interior Patrice Cellario, and Minister of Foreign Affairs and Cooperation Gilles Tonelli, the Ambassadors of France and Italy, and the Consul of Cyprus, Sir Stelios Haji-Ioannou.

Mrs IIsley pointed out that when she took over the presidency, her goal was to emphasise that BAM is first and foremost a charitable organisation which is supported by its members’ subscriptions, individual donations and local businesses, namely its patrons, represented at the June 14 event by Abercrombie & Kent, Banque Safra, and Landmark. “It is thanks to all these contributions, great and small, that we are able to fund our valuable community work.”

“I would like to take this opportunity to acknowledge the loyalty of our members and their guests who continue to attend our events and extend a very special thanks to those members who donate so generously through the year,” Mrs Ilsley commented, acknowledging also the Orchestra du Carabiniers and their Musical Director, Adjutant Olivier Drean, who were playing at the reception.

Official proceedings ended with a toast to the host sovereign and his wife –Prince Albert II and Princess Charlene and the Sovereign family. “We wish them a long and happy life in this beautiful and safe country … Monaco.”

Dust off the kilt for Burns’ Night with BAM

Business & Finance Cassandra Tanti - December 21, 2020
Cryptocurrencies and blockchain were among the topics discussed between Monegasque financial representatives and those in Luxembourg last week, ahead of a MOU signing.