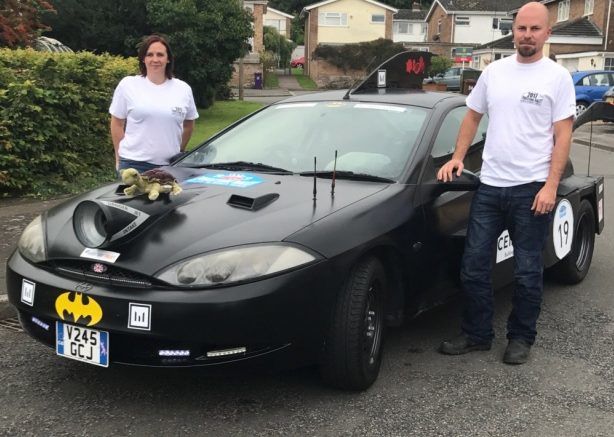 A husband and wife team from Royston, near Cambridge in the UK, are to take part in a 42-car rally from Dover to Monte Carlo to raise money for two charities, the Royston Crow has reported.

Sam and Matt Hanks are taking part in the Pavestone Rally in a Batmobile-style Ford Kuga – which they bought for £500 – in aid of the British charities the Teenage Cancer Trust and the Rainy Day Trust.

Mr Hanks told the Crow: “I think virtually everyone I know has been affected by cancer in some way.

“The work the Teenage Cancer Trust does is hugely important, because it’s hard enough to understand what’s going on as an adult, but to go through that as a young person must be so tough.” He added, “The Rainy Day Trust supports people in the building trade and their families who fall on hard times so it is very important to us, in the line of work we do.”

There will be a host of whacky challenges to take part in en route and every day is fancy dress.

“I think if you’re going to take part in something like this, you can’t just drive, you have to fully embrace what the event is about so we will be having different fancy dress days, as Batman and Batwoman, the Joker and Harley Quinn and other comic book characters.

“I am nervous, not in the least regarding car arguments about navigation! But we’ve always wanted to take part in a rally and are really excited.”

The RDT Pavestone Rally starts in Dover, UK, spends the first night in Luxembourg then on to Belgium, France, Switzerland and North East Italy before finishing in Monte Carlo with and Awards Dinner in Nice.

Local News Staff Writer - January 17, 2019
The Heritage Council was installed by the Minister of State. The Council is responsible for the preservation and enhancement of the national heritage.

Photo: Charly Gallo/CD[/caption] Traders at Apolline Gardens have met Jean Castellini, Minister for Finance and Economy, and other officials, to express concerns about remedial work on the buildings that is scheduled to last for several months. Extensive work on the development, which is mainly used to house Monegasques, is needed to rectify serious problems with the plumbing and water supply. Residents of the apartments are being offered temporary accommodation elsewhere while the work is underway. Traders are worried that footfall will be affected and their businesses will suffer. Mr Castellini, accompanied by Albert Croési, Head of Mission to the Minister of State for the Operation Apolline, Rémy Rolland, Administrator of Domains and Alain Laurent, Deputy Director of Public Works, met the traders on Tuesday, July 25, to discuss their concerns. Jean Castellini said that he wanted to reassure them about the effects of the work, which he said will be limited in scope, and the solutions that will be implemented. "We will do our utmost to make the inconvenience least impacting for everyone and that each situation is dealt with case by case,” he said.