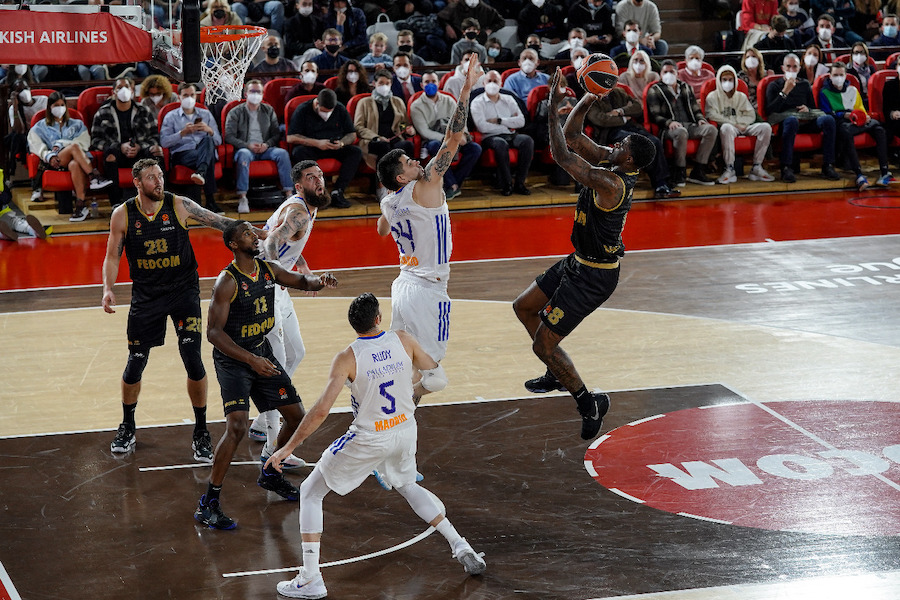 AS Monaco Basketball were cruelly beaten by Euroleague table-toppers Real Madrid at the Salle Gaston Medecin on Friday (84-90), the effervescent crowd almost spurring the home side to an unlikely upset.

Monaco began brightly against the reigning Euroleague champions, feeding off the intense energy from a 3,400 strong crowd that packed the hall for the biggest game of their season. Amongst the crowd was Prince Albert II and new Chairman Aleksej Fedoricsev, the latter having assumed his new role only a day earlier.

The defensive progress made since Sasa Obradovic’s return to the Principality club was once again on show. The Monaco players hunted the ball as a unit, succeeding in overturning possession on multiple occasions as the side finished the first-quarter with a narrow advantage.

Obradovic’s men continued to create openings for themselves within the key, though a lack of efficiency prevented them from extending their lead further. Instead it was Real Madrid who took the initiative, their lack of incision relative to their opponents was compensated by a superior efficiency both inside and outside the key. It was the Spanish side that therefore went into the break with a narrow lead (34-35).

Real Madrid came out looking to put the tie to bed, quickly rushing out into a 9-point lead. Monaco however, remained undeterred, the incessant roar of the crowd lifting the levels of the whole squad. The atmosphere reached fever-pitch as the hall erupted following an audacious, long-range Mike James three-pointer. That energy proved pivotal in the moments that followed. Danilo Andjusic, who had had a quiet evening, nailed a three-point brace to slash the deficit, instilling fans with the hope of pulling off the impossible.

Monaco went into the final quarter with a one point advantage, and the final ten minutes was a tense, cagey affair with defences largely on top. Only a matter of minutes stood between Monaco and a memorable victory, but Madrid showed the level of experience and resilience that won them last year’s title. The Roca Team’s six point advantage was cut by successive three-pointers, Rudy Fernandez restoring parity with seconds to spare.

A Dwayne Bacon three-point attempt on the buzzer didn’t land, and the game went into overtime. Monaco once again built an advantage, this time of five points, but once again they couldn’t hold on. Scores were once again tied (75-75), and Mike James’ on-the-buzzer attempt was easily blocked.

The tension in the hall could have been cut with a knife. Monaco began to tire in the second overtime, and Madrid pounced. Profiting from some sloppy Monaco finishing, they built an unassailable advantage. The hall began to empty before the final buzzer, as all of the built up tension and anticipation released in what was ultimately a negative catharsis, Madrid prevailing 84-90.

A visibly mentally and physically exhausted Bacon told Monaco Life after the match, “We came out and fought here. We had chances to win the game, but we just didn’t execute.” Monaco’s top-scorer on the night (19), was still happy with how the team competed. “It shows a lot to be able to compete. After tonight, everyone can see the work we’ve been putting in.”