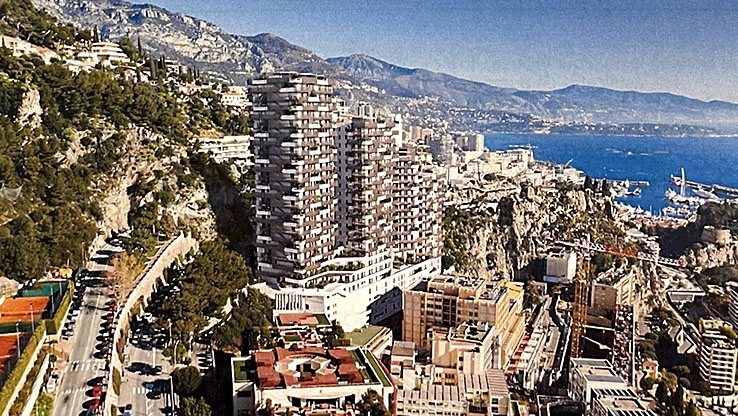 A new apartment complex, the Bel Air, has been given the go-ahead to start works by the municipal council. Here’s more on this modern and energy-efficient site.

Boulevard du Jardin Exotique will be home to a trio of new apartment buildings, collectively being called Bel Air. Featuring 197 apartments, seven to 11 office spaces, a shop, a creche with a 50-child capacity, community facilities and a car park, these buildings are also said to be green as well as aesthetically pleasing.

Currently, the location houses a 1960’s-era bloc of flats, which will be demolished to make way for the new buildings, which will be set up as towers rising up from the 6,000m2 plot. The first building, Bloc A, will be 23 stories high, the second, Bloc B, will be 18, and the third, Bloc C,13, all with five basement levels. Only Bloc B will house the shop, whilst the offices will be spread between the three towers.

Bloc A is set to have 81 apartments, 80 of which will be three rooms. Bloc B will have primarily two or four room apartments with a total of 61 homes in all. Bloc C will have six five-room flats, with the remainder of the 55 being similar to those in Bloc B. The entire site will have sweeping sea views from its perched location.

Space for 301 cars and 108 two-wheeled vehicles will be available, as will 197 storage cellars and a 1,596m2 creche. Additionally, a caretaker’s unit will reside in Bloc A to round out the complex. Construction is expected to be complete by mid-2026.

The project is also meant to be remarkably eco-friendly with low-carbon concrete being used for the foundations, solar protection placed on bay windows, a gray water recycling system being used to water plants, and super-insulated facades.

Another green feature is, literally, green. The project, designed by architect Patrick Raymond, includes a “vertical park”, with plants following the pedestrian pathways and running up the buildings, “as if it had never disappeared”, said council member François Lallemand before the members of the Municipal Council, going on to add it is a way “to form a bushy and tree-lined plant envelope which can be considered as a vertical natural park. The vegetation associated with a system of railings in vertical blades creates a kind of double skin.”

The plants will be hearty enough to withstand the fierce summer sun and are Mediterranean in origin.

Annabelle Jaeger-Seydoux, director of the Mission for Energy Transition, described the project as “exemplary” during the 7th Energy Transition meeting with the press last April. Certified Mediterranean Sustainable Buildings of Monaco (BD2M) silver level, the “maximum for a high-rise building”, and aiming to nab a NF Habitat HQE two-star certification, Bel Air is indeed an ambitious project.

“Our approach is inspired by the views which are today burdened by the building and which will be offered tomorrow to those who cross the borders of Monaco, breakthroughs accentuated by three distinct bodies of buildings which also have the advantage of improving the sunshine both of the forecourt at the back but also of the dwellings around the perimeter of the facades,” Raymond said.

The cost of the project is estimated to be €155 million.