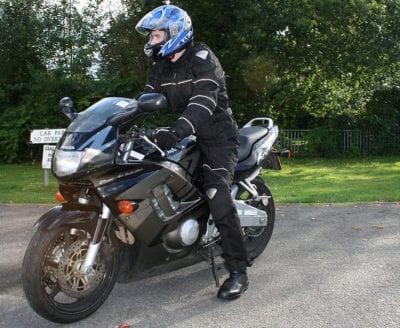 Drivers and passengers of motorcycles and scooters on French roads must wear thick gloves from November 20 or risk being fined. According to a European study, wearing approved gloves can significantly reduce most (95%) of hand injuries. Two-wheeler users who ignore the new rule will be fined €68, or €45 if paid on the spot or within 15 days.

The new rule was first announced last year but has just been published in the official journal. The driver will lose 1 point on his licence. Not wearing a helmet entails a fine of €135 and 3 points. 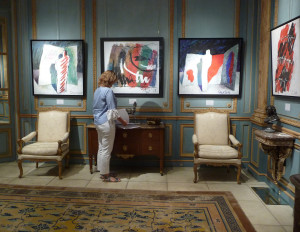 Galerie Ribolzi’s newest exhibition “Selected Works”, showcasing 30 works on canvas of GemlucArt prize 2015 winner, Karl Stengel, opened last night and runs until October 8. GEMLUC is an association of Monegasque businesses united in their fight against cancer. This is the 8th edition of the Contemporary Art Competition (GemlucART) under the patronage of HSH, the Princess of Hanover, and, as in previous years, the event, which is organised by Laurence Garbatini, raises money to fund clinical research and the equipment of specialised hospital services in oncology. This exhibition brings together more than one hundred artists – photographers, sculptors, painters – from around the world while educating the public about cancer. The works under this year’s theme “Soyez fou” (Be crazy), judged by an international jury of museum curators and art critics, will be exhibited at the Auditorium Rainier III and the first place winner will have an exhibition at Galerie Ribolzi at 3 avenue de l’Hermitage next year. 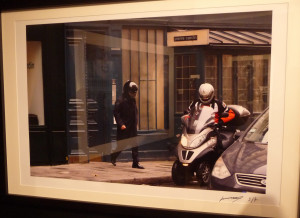 Around the corner at Opera Gallery (1 ave Henri Dunant), the vernissage for “Paparazzi”, an exhibition in partnership with the Photo Management agency, drew a steady flow of curious art goers. The exhibit, which was previously in Brussels, shows around 40 black and white shots by the original paparazzi photographers including Christopher Makos (Warhol, Jean-Michel Basquiat), Ron Galella (Aristotle and Jackie Onassis, Mick Jagger and Sinatra) and Sébastien Valiela, whose picture of France’s President Hollande wearing a scooter helmet as he leaves Julie Gayet’s Paris apartment is hanging at the gallery (pictured). Running until September 29, “Paparazzi” has attracted newer names, like Alison Jackson, who has become known in Britain for lookalike celeb photos, most recently one of Prince William, Kate and baby George in the bath, which is displayed in the gallery’s window (£10,500). Talking with Christopher Makos, who will be holding an exclusive show later at the Opera Gallery, about the use of camera phones, he told Monaco Life, “Most people have hundred of pictures in their phone and they never print one.” He cleverly continued, “The battery never runs out on my pictures.” 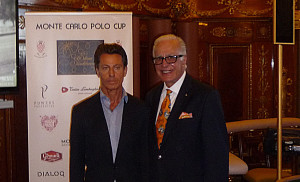 Over at the Casino, a crowd of 50 gathered at the Salle Médecin for a press conference and cocktail to mark the 4th Monte-Carlo Polo Cup, which takes place this weekend. Club Founder and President Francesco Mitrano, pictured with Richard Caleel, was delighted to address the room and announce that this year, HSH Prince Albert will be attending the last day of the tournament, a milestone for the organisation. Richard Caleel, Secretary General and former President of the International Polo Federation, commented, “We are extremely pleased to see the development of polo in Monaco, thanks to the energy of Mr Mitrano and his team and to the patronage of His Serene Highness.” Mr Caleel then added, “This will grow to be one of the biggest polo matches internationally.” The weekend kicks off with the Parade of Knights at Place du Casino Friday at noon, followed by lunch at the Salle Empire at the Hôtel de Paris and a Monaco Madame’s night at Amber Lounge. Monte-Carlo Beach will host the Gala dinner on Saturday. But the weekend is about a sport, originally known as Chaugan, that dates back 2,500 years. Four teams – Elena Sivoldaeva, Power Properties, Suisse Bank and Lamborghini – will battle it out on the hills above Monte-Carlo at Domaine de Vire-Vent. Elena Sivoldaeva, a jewellery designer and Honorary Member of the Russian Academy of Fine Arts, is a main partner of the polo event and supporter of the Monaco Disease Power association under the High Patronage of HSH Prince Albert, in aid of children and adults with mental disabilities and autism and their families. 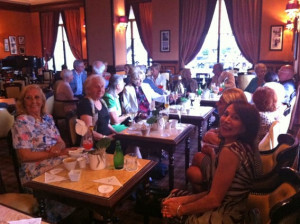 And finally, across the square at the Bar Américan in the Hôtel de Paris on Thursday evening, it was Happy Hour for the Canadian Club de Monaco, which will be celebrating Canada’s 150th birthday in 2017 with events across the year in the Principality.

Naâman. Photo: Emma Birsk[/caption] June 21 will once again be the occasion, as every year, to celebrate music in the Principality. The highlight of the event will be a large free concert on the Port of Monaco from 9 pm with a young artist from the French reggae scene, Naâman. In three albums, the young singer has appropriated the essence of Jamaican music and added a touch of modernity that has established him as one of the French leaders of the genre. His successive tours made him known in France and Europe on stage at the biggest reggae festivals – including the 2015 Francofolies – and also internationally with concerts all over the world, from Canada to China, through Jamaica, India, and Lebanon. Opening the free concert will be Scars, who will welcome the public to this warm and colourful evening in Port Hercules.