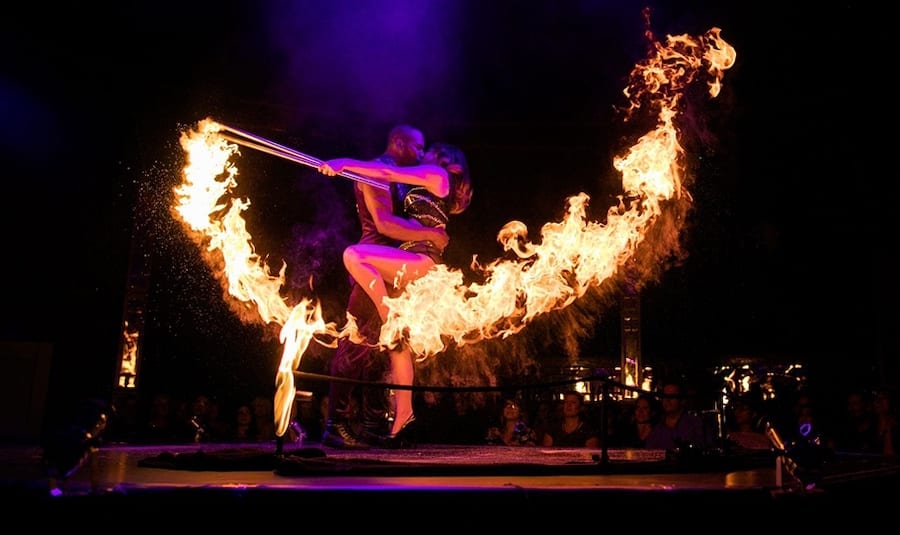 Circus meets cabaret in Bohemia, the new show coming to the Principality in January in a co-production by 8 Stars Monaco and The Black Cat Cabaret.

Bohemia, “a contemporary circus cabaret blending acrobatics, dance, comedy, theatre, singing and live music” has a bit of something for everyone. The show, coming to Monaco for three nights from 8th to 10thJanuary 2021, was a smash hit in London when it debuted at the Underbelly Festival in Southend in 2018. Bohemia saw 45 standing room only performances that gained them a loyal following and enthusiastic media attention.

Since then, they’ve taken the show on the road with the hope of delighting the audiences of Monaco.

The company bring with them a ‘Spiegeltent’, a vintage large round tent made of wood and fabric with an interior space consisting of a dance floor and small cosy alcoves. The walls are lined in mirrors, giving it an intimate party atmosphere.

This tent will be set up in the esplanade of the Grimaldi Forum and is a first for the venue.

The show’s mistress of ceremonies, known professionally as Miss Frisky, is just what would be expected of a performer with such a moniker. She is known for her extravagant costumes, her wicked sense of humour and an exceptionally good voice.

The performers include choreographer Katharine Arnold, a multi-disciplinary aerialist who has had extensive experience on stage and screen internationally during her career, as well as Leon Fagbemi, a former competitive gymnast turned professional circus and cabaret actor. Charlotte O’Sullivan, an alumni of Cirque du Soleil, Jo Moss, a Royal Academy of Dramatic Arts and Ecole Superior des Arts du Cirque graduate who has performed around the world, and Hayley Harvey-Gomez, a renowned burlesque and fire artist are also featuring.

As for the nuts and bolts of the show itself, it claims to transport the audience to another world, giving them a “whistle-stop tour of Bohemia through the ages, from Homer to Montmartre from the Chelsea Hotel to Acid House’s second summer of love.” From start to finish, it is a blur of lights and sounds and motion dedicated to the sheer pleasure of those who attend.