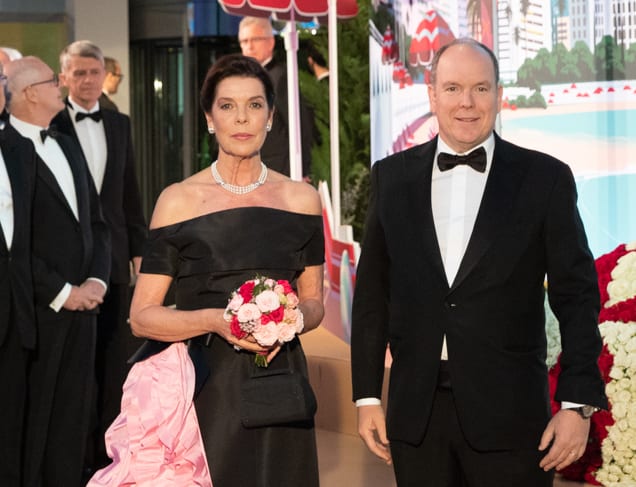 The first major event on Monaco’s high society social calendar, the Rose Ball, is being shelved for the second consecutive year due to Covid.
Fans of the annual gala, which normally takes place in March, will be disappointed to hear that they will have to keep their gowns and tuxedos under wraps for another 12 months.
After initially being postponed in 2020, the 66th Bal de la Rose was due to take place this month at the Salle des Etoiles in the Sporting Monte-Carlo.
But with heavy restrictions still in place and an active circulation of the Covid-19 virus, organisers Société des Bains de Mer (SBM) have been forced to put one of the Principality’s most treasured celebrations on hold, again.
President of the Princess Grace Foundation Caroline, Princess of Hanover, chose Bollywood for the gala’s theme and had given her friend Christian Louboutin carte blanche to make it a reality.
The legendary fashion designer channelled his fascination for India to conceptualise a grandiose and poetic décor for the Rose Ball, which has always served as a symbol of glamour and fuelled the fascinating legend of Monte-Carlo, which it helped to create.
But the ball, created by Princess Grace in 1954, is not just a high society event. Since 1964, it has also raised important funds for her Foundation, which supports people in difficulty and disadvantaged children.
The last Rose Ball took place in 2019 on the theme of the ‘Riviera’. Hosts Prince Albert and Caroline, Princess of Hanover, paid a special tribute to the late Karl Lagerfeld, who for several years had worked with the princess to design the ball. The ‘Riviera’ theme was the last Lagerfeld had designed before his death in February that year.
Famous French-Egyptian fashion designer Christian Louboutin was appointed his successor, continuing a long-held tradition of great names taking charge of the artistic organisation of an evening that marks the first important social event of the year.
The 66th Rose Ball is now due to take place on 19th March 2022.

Photo: Caroline, Princess of Hanover and Prince Albert of Monaco Preside over the 2019 Rose Ball. Source: the Prince’s Palace