Books on the beach with prizes to be won Tuesday

In collaboration with the Marine World Discovery Centre, Monaco’s Environment Department is organising a pop-up library on Larvotto Beach on Tuesday, July 25 and Monday, August 7, between 4 pm and 7 pm.

The Bibliomer, an itinerant and playful library, travels all summer along the beaches of the coast. Last year, it enabled young readers to discover the riches of the Mediterranean Sea, especially the coastal zone. Smaller children were particularly fascinated.

This summer the focus is on entertainment. Facilitators will offer workshops on fishing, whale watching and waste management, with booklets, books and prizes to be won. Further information: environnement@gouv.mc. 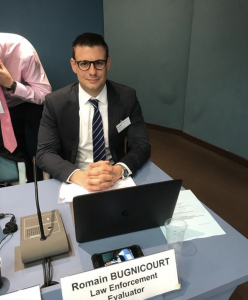 Romain Bugnicourt-SICCFIN-MONEYVAL- - Romain Bugnicourt, Section Head, SICCFIN; member of the fifth round evaluation team for Andorra. © SICCFIN[/caption] As part of the international and ongoing activities of the MONEYVAL Committee of Experts, a workshop was held in Monaco on April 9 and 10 by SICCFIN, the Principality’s financial regulations enforcement authority. States that are members of the Council of Europe are represented on MONEYVAL, as is the Russian Federation. This workshop brought together financial intelligence units with missions identical to those of SICCFIN and represented a dozen countries, financial centres, members of MONEYVAL and FATF. The purpose of the meeting was to reflect on a methodology for assessing the risk of terrorist financing in this type of jurisdiction and on the best practices to adopt to combat this risk.

Mothers of Africa. Photo: Paul Crompton/Go Zambia - Shiyala School Build 2017[/caption] On Saturday, December 2, the Monaco-based association Terres méditerranéennes is holding its annual Christmas market in collaboration with the humanitarian project Mothers of Africa. Mothers of Africa was founded in 2004 by Professor Judith Hall OBE, Head of Anaesthetics, Intensive Care and Pain Medicine at Cardiff University School of Medicine, who became aware of women dying unnecessarily during childbirth in Africa. Each day in Africa the number of mothers who die giving birth is equivalent to the number of seats in three jumbo jets. Sadly, the chances of a woman dying from treatable or preventable complications of pregnancy and childbirth are one in six. [caption id="attachment_25874" align="alignnone" width="640"]

Photo: Paul Crompton/Go Zambia - Shiyala School Build 2017[/caption] Judith, who is highly regarded in her profession and has too many titles too include, “had to try” to alleviate the problem. The former Welsh woman of the year set up a Medical Educational Charity that trains medical staff in Sub-Saharan Africa to care for mothers during pregnancy and childbirth. She also provides African women the tools necessary to implement change via education and infrastructure within their communities. Judith’s sister, Janice Newport, is a Monaco resident, and over the past two years she has found enthusiastic local support from Susanne Batstone. Judith and Janice have visited Zambia previously and Susanne joined them to help run a holiday school in Shiyala in August of this year – a truly life changing experience. Sandrine Mannoni Oria, Brett Barling, Vicky O’Shea and Noeline Gally have also joined the team in Monaco. [gallery td_select_gallery_slide="slide" size="large" ids="25876,25870,25875"] Last Friday, Mothers of Africa took part in a fundraising cocktail at the Metropole Hotel in Monaco for 50 people to talk about their school in Shiyala Village, Zambia, and announce their new project. After the success of the Shiyala school, which opened in August after five years of work and is home to 540 students, even though it has no electricity, Mothers of Africa has decided to create a Resource Centre for Evergreen School, an existing institution, which runs on electricity. Their new fundraising goal is a modest €80,000. “With the school, we can walk away with confidence knowing that the teachers can run it themselves,” Judith told Monaco Life. “We have created a sustainable model by investing in professionals in Africa who will look after their own people.” Talking about the Resource Centre, which will be a regional school, Judith said, “You can’t go too big. A regionalised approach with set standards is key but change doesn’t happen if you are too ambitious.” [caption id="attachment_25867" align="alignnone" width="640"]

Photo: Paul Crompton/Go Zambia - Shiyala School Build 2017[/caption] Friday’s invitation-only event was hosted by Ane Fogtdal, owner of Hip Bazaar who had organised a jewellery pop-up, donating ten percent of the evening’s sales of her clothing and accessory line to Mothers of Africa. Judith Hall made it very clear that all monies raised by the association go to help people in need at a local level and that Mothers of Africa pay all their own expenses for visits. Members of Mothers in Africa will be at Saturday’s Christmas market with Terres méditerranéennes where various African-inspired products will be on sale, as well as table linen, decorations and Christmas cards, jewellery and clothes. The one-day fair opens from 10 am to 7 pm in the workshop area "u mazaghìn" at 18, rue Grimaldi (interphone Terres méditerranéennes). A children’s workshop, from 10:30 am to noon, for ages 5 and up will make "mariote e gali", small puppet-like figures from an old Monaco Christmas tradition. Cost: €10/child or €8 for members. Bring aprons. Reserve, specifying names and ages of children, at termedmonaco@gmail.com or on 06 22 800 166. For those who can’t attend but wish to help Mothers of African, donations can be made online. [gallery td_select_gallery_slide="slide" size="large" ids="25861,25871,25865,25868,25859,25860,25862,25863,25864,25866,25858"] Article first published November 29, 2017.