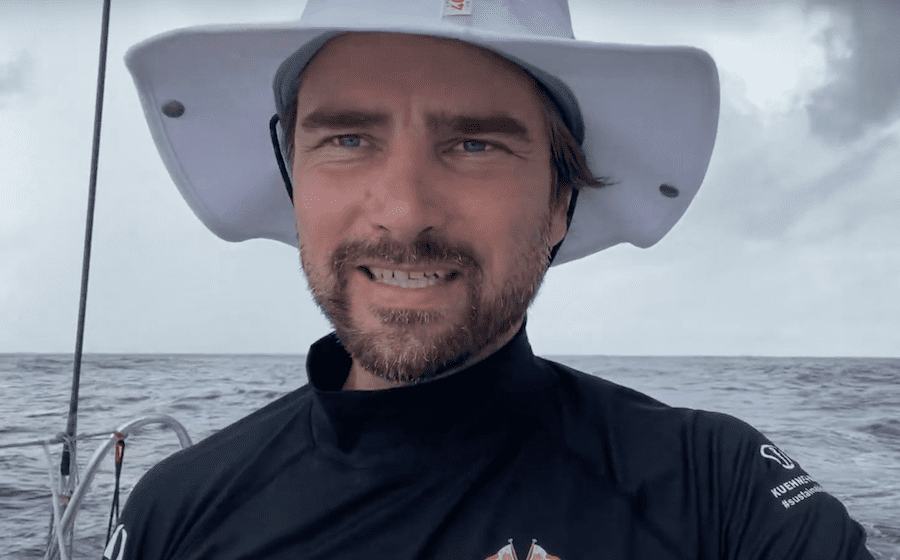 Boris Herrmann has hit a patch of the doldrums in the Atlantic during this late stage of the Vendée Globe, saying that “the sea and sky are messy.” But progress is still being rapidly made.
Boris Herrmann, the skipper of the SeaExplorer-Yacht Club de Monaco, is make steady progress on the homeward bound stretch of the Vendée Globe around the world solo race, despite having hit some tricky weather.
“I totally underestimated the doldrums,” he said in a video published on Sunday on his personal website. “I thought there would be a little afternoon lull then go on. Not at all! The whole night was a hassle and the whole day and I’m afraid to even think about the next night.”
The strain he was under was visible in his video, as the German captain finished his 70th day alone on the sea. He still has his eye firmly on the ball despite the weather not being as predictable as he hoped for. This is a constant worry for any sailor and he declared at one point, “I am stressed.”
He goes on to say, “The sea and sky are messy, you can feel the North Atlantic very early. There is a huge swell and a chop in all directions, it slows me down a lot. Tonight, I should be in a stable trade wind. We’re going through the stages one after the other, quite quickly. For the mind, that’s good! At the latitude of Recife, I’ve started to go west, to slide. For a while I lost quite a few miles because I was a bit low, a bit slow. I had observed on the satellite photos of the doldrums that it went better in the West. Today it’s not really true anymore… We’ll see tonight. The cartography is not necessarily representative in the distances between the competitors. Today, we see Thomas (Ruyant) making a tack towards the North-East and it shows that he gains a lot of miles on the map, but the most important thing is really North-South. East-West, we don’t really care.”
As if the sailing part wasn’t keeping Herrmann busy enough, he still has chores to complete on the boat each day, such as changing hydrogenerators and changing pressure switches on his keel system. These tasks ensure the boat is in top form and this, he says, is good for morale.
“I’m in a good position in the race, it gives me every reason to be motivated. I try to stay calm: I keep in mind that above all, we have to reach the finish. Every day I appreciate the fact that I’m still at sea. I’m always afraid of having technical problems, so I’m very careful.”
Herrmann has at least not suffered a sense of humour failure on his long, lonely trip. He states on his video with a smile, “I should maybe pray to the god of winds. Dear wind-god, send me some wind! Now! Here! To the boat!”
Let’s all hope his prayers are soon answered.

Photo: Screen shot of Boris Herrmann during his video message