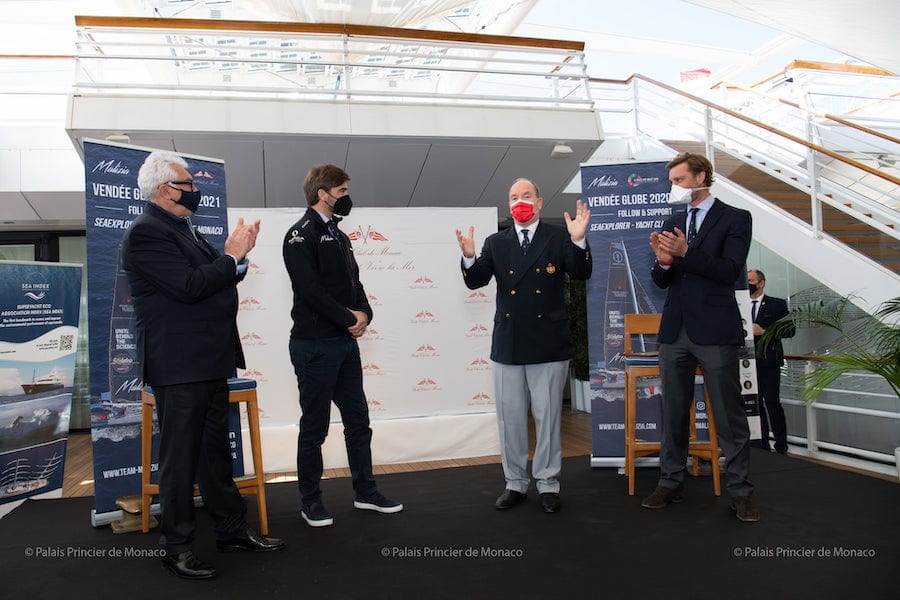 Prince Albert and Pierre Casiraghi have officially welcomed Boris Herrmann back to the Principality where the German sailor is sharing his tales of completing the world’s most gruelling solo race, the Vendée Globe.
As skipper of the Monegasque vessel Seaexplorer-Yacht Club de Monaco, Boris Hermann brought ‘Around the World in 80 Days’ to life when he crossed the finish line of the Vendée Globe sailing race on 28th January with a time of 80 days, 14 hours, 59 minutes and 45 seconds, earning him a respectable fifth place.
Since then, he has kept a low profile, until Monday when he returned to the Yacht Club of Monaco (YCM) with Club President Prince Albert II and Vice President and fellow Malizia team member Pierre Casiraghi.
Prince Albert had kind words for Herrmann, saying, “I would like to congratulate Boris once again warmly for what he has accomplished, but I also wanted to thank the entire Malizia team which, under the leadership of Pierre Casiraghi, has been behind this project for more than four years.”
For two hours, Herrmann shared stories about his time alone on the sea, with tales about sleep management and culinary delights, as well as the difficulties of living with the constant sounds of the wind and waves. He said that this aspect “can drive the most seasoned sailor crazy” and talked about the tremendous amount of work that was necessary to prepare for the race.
Herrmann suffered a few setbacks during the race including being caught in the doldrums, having a mainsail tear rounding Cape Horn and a foil getting damaged during a collision just as he was coming into Les Sables d’Olonne to finish the race. He expressed his great relief at having finished the race in the end.
“In these moments, we wanted to help him. Especially since I was able to project myself very well and understand what was going on, thanks to our double races,” Pierre Casiraghi commented, commiserating with his friend.
Herrmann was the first captain to fly Monaco’s flag in the historically gruelling race. He also was amongst the first to have an onboard scientific laboratory to collect ocean samples from some of the world’s least travelled seas.
For his efforts, he was given an honorary membership card to the YCM.

Herrmann will remain in Monaco for the week, sharing his experiences with children of the yacht club and giving a presentation there on Friday as part of Monaco Ocean Week.