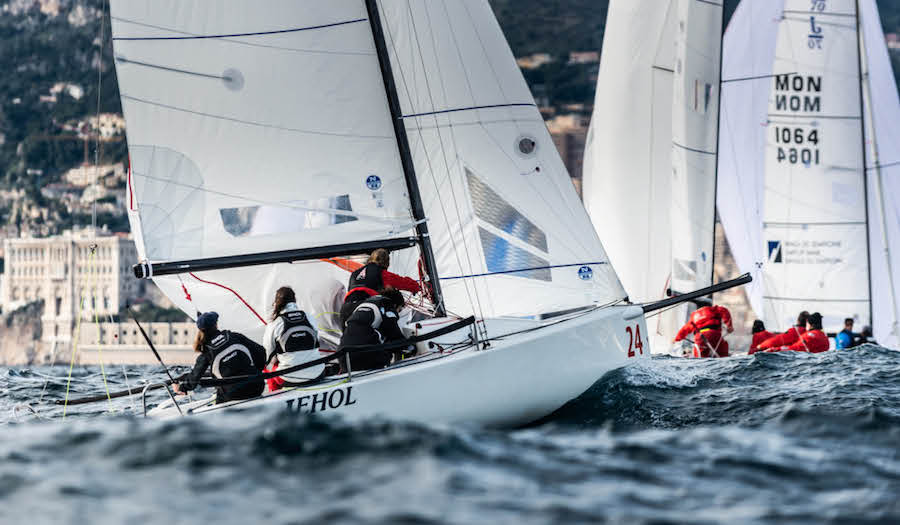 45 teams representing 13 countries competed in the 7th annual event organised by the Yacht Club of Monaco, in conjunction with SLAM and Valentin Zavadnikov, and were treated last weekend to fantastic racing conditions. Five to 12 knot westerlies and 10 to 14 knot easterlies marked the five races, giving the 180 sailors a chance to race in the spot they will return to in October 2021 for the J/70 World Championships.

The victorious crew of Brutus, though only in the amateur division, showed they have what it takes to play in the big leagues. The English Royal Southern Yacht Club team placed well throughout, with 2nd, 2nd, 4th, 3rdand 5th finishes.

Second place went to Russia’s Arttube led by Valeriya Kovalenko, and the bronze went to the Danish team from Upupup, tying with Giangiacomo Serena di Lapigio’s G Spottino from the YCM.

Monaco entrants Junda, skippered by Ludovico Fassitelli, came in a respectable 6th, after a disappointing 19th place in one of the races.

Overall, Brutus has the lead in the Winter Series provisional rankings with 43 points. Junda is in 2nd, followed by 2017 and 2018 winners Arttube.

Next up is the 36th Primo Cup-Trophée Credit Suisse from 6th to 9th February in Monaco where one-design boats from six classes will battle it out for the top spot.