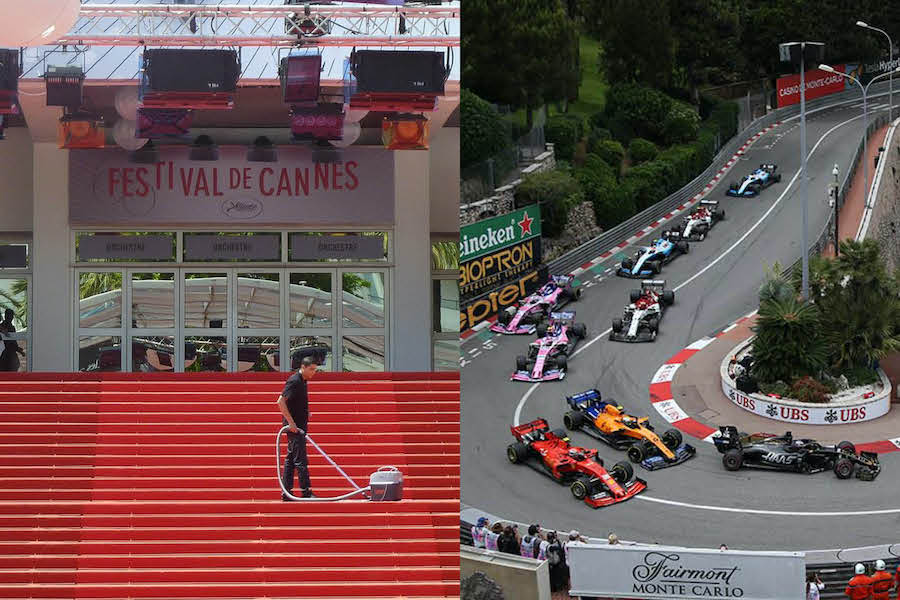 Organisers of the Cannes Film Festival say it will still go ahead in 2021, however it is likely to be pushed back from its original May schedule. So, what does this signal for the Monaco Grand Prix, which is due to take place during the same period?
The world’s biggest film festival was originally scheduled to be held between 11th and 22nd May. Now, it “will certainly take place in 2021”, according to a festival spokeswoman, but it may have to be postponed to sometime between the end of June and the end of July.
Cannes’ organisers say they still need some time “to evaluate the situation at the start of the year” before making a decision.
The Cannes Film Festival serves as the “season opener” for the region, attracting a large number of elite visitors who often move swiftly on to Monaco to enjoy the Grand Prix and all of its associated celebrations.
The Monaco GP is scheduled for 23rd May – the same weekend that the final days of the Film Festival were due to take place.
So, the questions on everybody’s lips remain: will the Monaco Grand Prix go ahead as planned or will the Principality host the GP without an audience? Will the GP be pushed back to a date later in the year or cancelled altogether like the 2020 event?
Rumours have already been floating around that the season-opening Australian Grand Prix will be delayed due to the increasing number of Covid cases in the country. The discovery of a new coronavirus strain first uncovered in the UK is also making authorities reluctant to open up their borders.
If the Aussie grand prix cannot go ahead on 21st March as planned, it is likely to be postponed until later in the year. This would involve moving other events on the 2021 F1 calendar, which is the longest the sport has ever planned.
Tickets are already on sale for the Bahrain Grand Prix, which is scheduled for 28th March and would become the season-opener if the Melbourne race is postponed.
“In 2020 we proved that we could return to racing safely and delivered what many thought was impossible in March,” said a Formula 1 spokesperson. “We have set out our 2021 calendar and look forward to the return of F1 in March this year.”
According to various reports, F1 teams have already been presented with an updated provisional calendar for the 2021 season.
While it was confirmed a few weeks ago that the Vietnam Grand Prix would not take place again in 2021, it seems unlikely now that the Chinese Grand Prix will go ahead this season also, although talks are still ongoing.
The Monaco Grand Prix is still 5th on this provisional schedule.
But it won’t just be the Grand Prix that Monaco is set to host this year. Fans are also looking forward to a racing trifecta, with the 12th Historic Grand Prix scheduled for 23rd April and the Formula E Prix on 8th May.
All dates are subject to approval by the FIA World Motor Sport Council.
It takes around six weeks to construct the circuit for the Monaco Grand Prix. Work was just beginning for the 2020 event when the FIA stepped in and cancelled the race. Pushing the race back to a later date is not considered an easy option in the Principality due to a full events calendar the entire year.