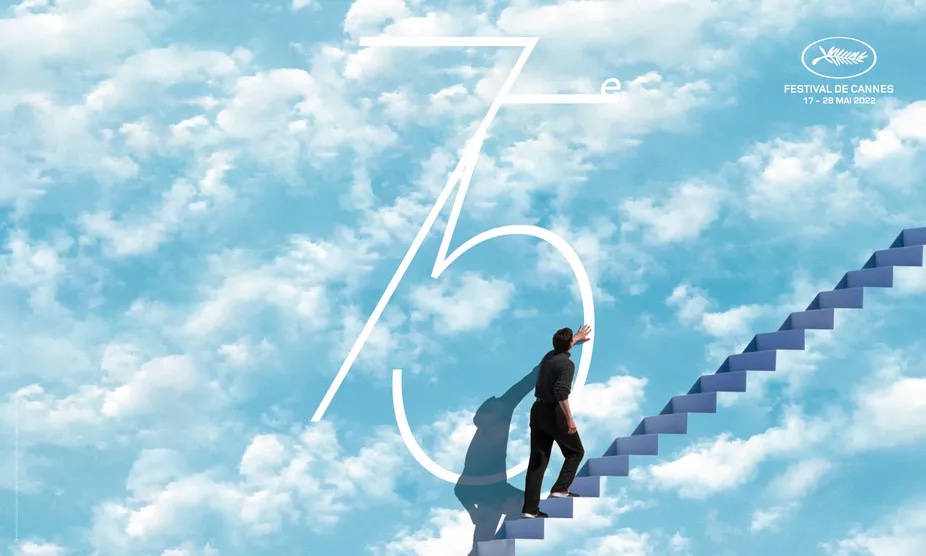 The official poster for the Cannes Film Festival 2022 has dropped and, for the 75th edition, celebrates the classic 1998 Jim Carrey film The Truman Show and the complexities that it represents.

The poster released on Monday shows a lone man walking up a flight of stairs, “touching” the sky as he ascends, in a moment blurring the lines between what is real and what is not. A large graphic 75 is positioned under the man’s hand in homage to the three-quarters of a century of the Festival’s existence.

“Just as the unforgettable Truman embodied by the one-and-only Jim Carrey, whose fingers brush his horizon, the Festival de Cannes takes the extreme nature of the world in its stride in order to grasp it again,” explained the film festival organisers in launching the poster. “The climate crisis, humanitarian disasters, and armed conflicts… the reasons for concerns are numerous.”

Peter Weir and Andrew Niccol’s The Truman Show is a dystopian satire from 1998 about the world’s first baby legally adopted by a company, who lives on a huge movie set in a gigantic studio dome, his every move captured by 5,000 hidden cameras and broadcast to the world, unaware that everyone he knows and loves are actors paid to be a part of his life. Almost 24 years after its release, we see that it not only predicted the reality TV craze that has swept the world, but also foreshadowed the scope of modern product placement and invasion of privacy.

“Just as Truman escapes falsehood as he rises, the Festival, with its famous ascending red carpet, offers viewers the truth of the artists when they enter the theatre,” concluded the Cannes organisers.

The Cannes Film Festival was originally known as the International Film Festival and was the brainchild of Jean Zay, French Minister of National Education, who conceived of the idea in 1938 as an alternative to the Venice Film Festival, which at the time was being manipulated by dictators Benito Mussolini and Adolf Hitler.

Cannes was chosen over Biarritz as the locale, and organisers set to work, with the support of the British and Americans, to create a world-class rival to Venice. All the pieces were in place, with top stars of the day including Cary Grant, Gary Cooper, Mae West and Spencer Tracy, assembled and ready to go.

Sadly, the day after the 31st August 1939 launch, Hitler invaded Poland sparking World War II, and the Festival was cancelled until the end of the war, when in 1946 it was resurrected.

Organisers are likening the 2022 edition to those past festivals where the worries of war, humanitarian disasters and climate issues were overcome by a strong conviction that “art and cinema are where contemplation and the renewal of society unravel,” reiterating that “the purpose of the Cannes Film Festival, in a spirit of friendship and universal cooperation, is to reveal and showcase quality films in the interest of the evolution of the art of cinematography.”