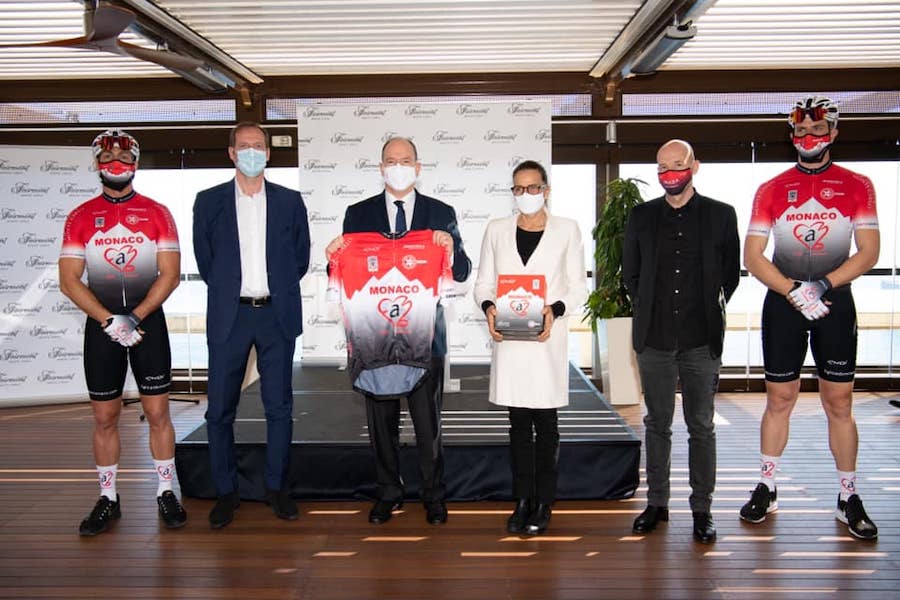 The Prince’s Riflemen were officially handed their new Fight AIDS Monaco cycling jerseys on Monday at the Fairmont Hotel, as Prince Albert II and Princess Stephanie were given personalised versions of their own.

Prince Albert II and Princess Stephanie attended the presentation of the new Prince’s Riflemen’s cycling jerseys, now featuring the Fight AIDS Monaco logo. The unveiling, which occurred at the Fairmont Hotel on Monday, was also an opportunity to offer the Prince and Princess their own personalised jerseys.

The new kit was designed by high end cycling products designers Ekoï and have replaced the former jerseys that dated back to 2010. The updated versions are red and white, fading to black at the bottom with the Fight AIDS Monaco logo front and centre.

The Riflemen of the Prince (Carabiniers du Prince) use not just cycling but sport in general as an integral part of their professional training. Some 70% of the Riflemen practice sport on a regular basis to maintain strength and good health, as well as to teach respect for themselves, rules and others. In addition to cycling, they also are encouraged to play team sports such as petanque, football and beach volleyball, as well as individual ones like running and badminton.

Fight AIDS Monaco was founded in 2004 by Princess Stephanie as a non-profit organisation to help those living with AIDS to combat the psychological, financial and discriminatory distress that can come with living with the as-yet incurable condition.