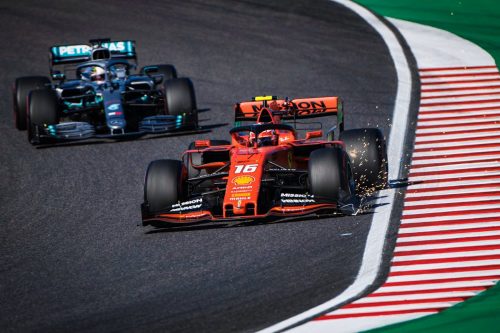 Red Bull pilot Max Verstappen accused Ferrari’s Charles Leclerc of “irresponsible driving” after their collision at the start of the Japanese Grand Prix, destroying the Dutchman’s chance at a win as well as his car.

There was plenty of action on the track Sunday, where the two future Formula One stars butted heads within minutes of the start. Verstappen had a good start from fifth position and moved ahead of Leclerc at the second turn, but Leclerc was having none of it and rammed into the Red Bull rising star, sustaining damage that eventually led to him being forced to retire from the race.

Leclerc was clocked by officials for the incident, as well as continuing to drive with a broken wing beyond the opening lap that finally broke apart and flew into Lewis Hamilton’s car. He was docked five seconds for the first offence and 10 seconds more for the second, making what should have been a sixth place finish a seventh place one.

An unhappy Verstappen told Sky F1: “My whole car is destroyed. The whole side. There are just holes in the side of the car. And now they will investigate it after the race. What more should he do to get a penalty? I like hard racing, but I don’t think this was hard racing, I think it was irresponsible driving into turn two. He had a bad start so for sure he was trying to recover places but there’s only so much you can do. It’s a shame that it happens.

My mistake in Turn 1. It ruined Max’s race and put ourself in a bad position for the remaining of the race.
Mexico next ??
?: @F1Gregory pic.twitter.com/BfncHTkk0Y

The win went to Valterri Bottas, who had a nearly-picture perfect day, beating Ferrari pilot Sebastien Vettel by more than 10 seconds and giving his Mercedes teammate Lewis Hamilton the third place spot.

This too was a bit fraught, as Vettel had pole position but suffered from an incredibly bad start rolling forward in his grid box before the start of the race, almost causing him to be penalised. But even without the penalty, Bottas had the jump on him from the start, and the German never recovered the top spot.