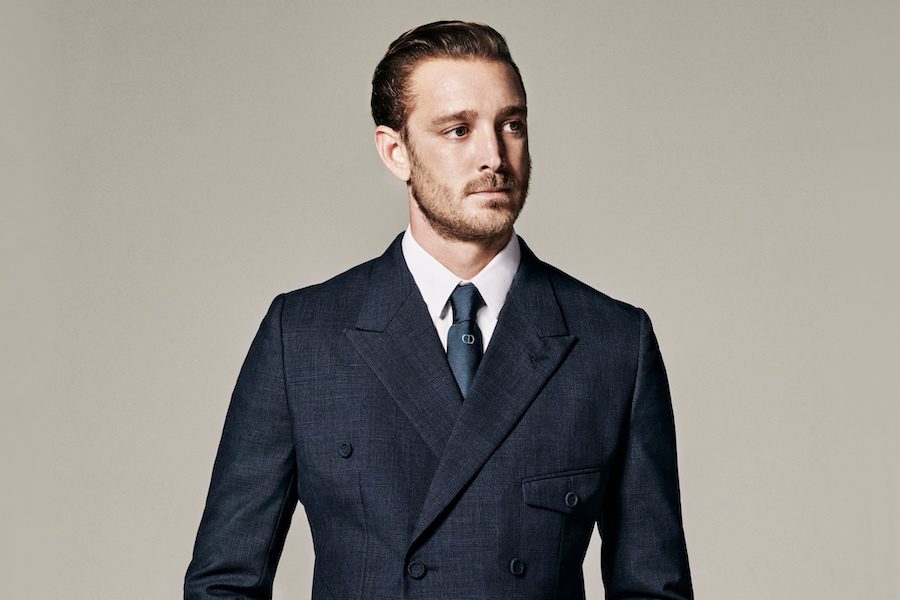 In a recent Dior press release, Pierre Casiraghi was called “an icon of elegance”. It added that the “The Monegasque businessman embodies the new facet of tailoring constantly reinvented by Kim Jones [creative of Dior’s men’s line], a timeless modernity.”
Dior has had links to the Princely family for decades. In 1956, his grandmother, Grace Kelly, wore a Dior dress on her first outing with Prince Rainier III. Christian Dior died the following year, but Princess Grace remained loyal to the brand, forming a 20-year bond with the house’s artistic director, Marc Bohan. A 2019 exhibition titled ‘Grace of Monaco: Princess in Dior’ revealed that a third of her personal collection at the Palace was created by Dior.
“Princess Grace was the most famous client of the house of Dior. She affirmed in the eyes of the whole world the image of a modern woman and committed to her time,” said Bernard Arnault, president of the fashion house, recalling this collaboration in a book named after the exhibition and published in 2019.
Pierre’s mother Princess Caroline wore Dior in her marriage to her first husband Phillippe Junot, while Princess Stephanie, Pierre’s aunt, worked as an intern to Marc Bohan in the 1980’s, further cementing the bond between the houses of Grimaldi and Dior.
Pierre Casiraghi is known for his ability to elegantly don a tuxedo for myriad charity events, though he is equally at home in t-shirts and shorts whilst manning sailing yachts. This versatility makes him an ideal brand ambassador, seen as  both accessible and regal all at once.
34-year-old Casiraghi is eighth in line to the throne of the Principality and is also a philanthropist, businessman and an accomplished sailor, acting as skipper of the Monaco Yacht Club’s Team Malizia. He is the son of Princess Caroline and Stefano Casiraghi, who was tragically killed in a speedboat accident when he was just three years of age. He is majority shareholder in the construction company founded by his father, Engeco.
This is not the first time Casiraghi has been selected as a brand ambassador. In 2013, he was photographed in a series of pictures by Jean-Baptiste Mondino for luxury shoemaker Berluti.
Now, he joins his wife Beatrice Borromeo as ambassador for French fashion house Dior, a title she was given in February of this year.