Celebrating the end of year in style

Celebrating the end of year in style 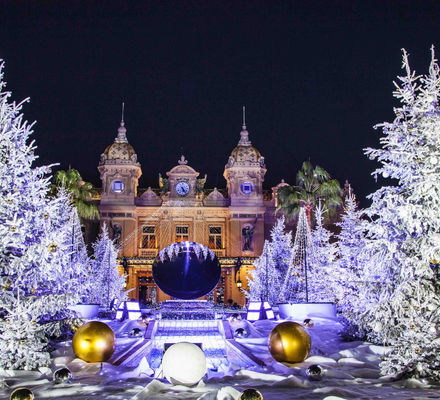 Hot air balloons, “mountain chalets” and dazzling greenhouses will all form part of the end of year celebrations in the Principality, as SBM aims to make this year’s festivities more exceptional than ever.

SBM has a holiday line-up planned that even Father Christmas would have a hard time beating.

Starting 6th December, under the theme Luck Raises Us, it all begins at Casino Square where four hot air balloons with baskets filled with gifts will light up in a forest made entirely of white fir trees. The Casino itself will be part of the décor from 28th to 31st December, with an illuminated map gracing the façade.

The Monte Carlo Bay Hotel & Resort will set the scene of a mountain chalet, where they will transform the bar into ‘The star of the snow’ and hold daily Christmas games and will serve a holiday inspired tea from 3pm to 5.30pm. Additionally, they will throw a ‘Winter party’ every Thursday in December to keep the atmosphere going.

Five greenhouse installations will be dotted around the interior courtyard of the Hôtel de Paris where artisans will have their wares for sale and craft workshops will be offered to kids young and old. A special ‘Bubble party’ has been organised for 12th December to add to the fun.

Finally, no Christmas would be complete without Santa, who will visit the Hôtel Hermitage on the 18th, 21st, 23rd and 24th of December from 3pm to 6pm. Pastry chefs will be on hand for workshops with the kids, as well as magicians and makeup artists to round out the party.

For music lovers, 70’s band Chic and Nile Rodgers will be playing a funk and disco dinner on New Year’s Eve at the Salle des Etoiles.