Celebrating the Patron Saint of Monaco

Celebrating the Patron Saint of Monaco 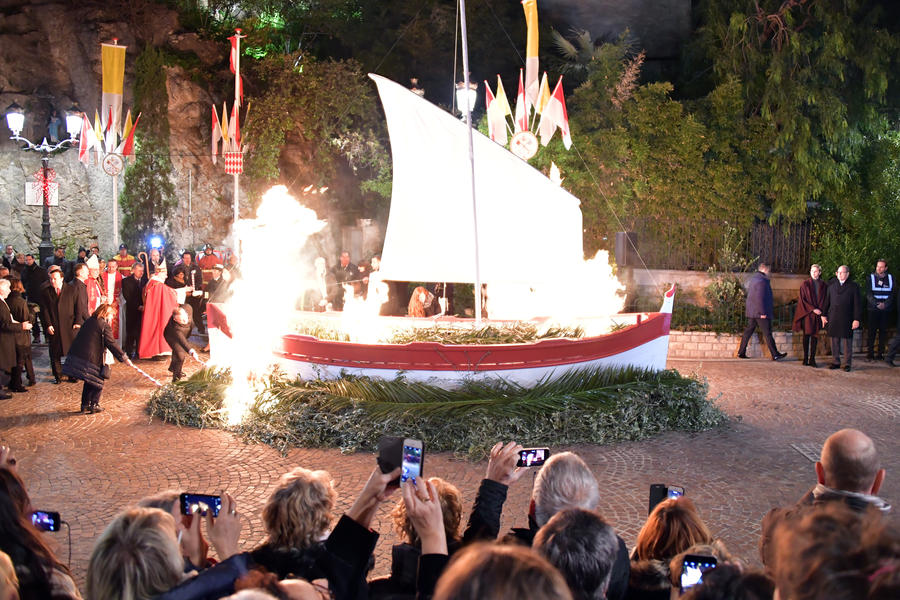 Monaco is getting ready to celebrate the Patron Saint of Monaco, Sainte Dévote, on Sunday 26th and Monday 27th January. Here’s everything you need to know about this very special day in Monaco’s calendar.
It is one of the oldest traditions celebrated by the Principality of Monaco, permeating national culture in fields as diverse as religion, folklore, popular beliefs, history, literature, the arts, painting, music, numismatics and philately.
The tradition stems from the legend of Sainte Dévote, a story that is transmitted in medieval texts and is held dear to all Monegasques.
According to the legend, Devota (Dévote), a young Christian native of Corsica, was martyred by the prefect Barbarus under the Emperors Diocletian and Maximian. Her body was stolen by worshipers during the night, put in a boat, and brought to Monaco where she was buried in a chapel in the valley known as ‘des Gaumates’ on 27th January. Scholars say it was the year 303 or 304.
In the 17th century, under the rule of Prince Honoré II, Sainte Dévote became the patron saint of Monaco.
But the tradition wasn’t really established until the 1870s and since then, each year, a boat on a pyre is burned in the presence of the Sovereign Prince, the Princely family and many Monegasque personalities. Once the boat is burned, a musical-fireworks show takes place on Port Hercule.
On Monday 27th January, the feast day, a solemn mass is celebrated in the Cathedral by the Archbishop of Monaco. Attending this religious ceremony are the Princely family, the Prince’s government, elected assemblies and constitutional bodies, as well as many faithful Catholics.
At the end of the ceremony, a procession with the penitents of the Archiconfrérie de la Misericorde makes its way towards the Prince’s Palace with a reliquary containing the relics of the saint, escorted by the Carabinieri of the Prince.
The procession then stops on Place du Palais, where an Honor Guard and the Prince’s Carabinieri Orchestra pay tribute. A celebrant blesses the Princely family with the relics before the procession heads to the ramparts where another celebrant blesses the city and its people. Finally, back in front of the Cathedral, a last celebrant blesses the sea and the fishermen.