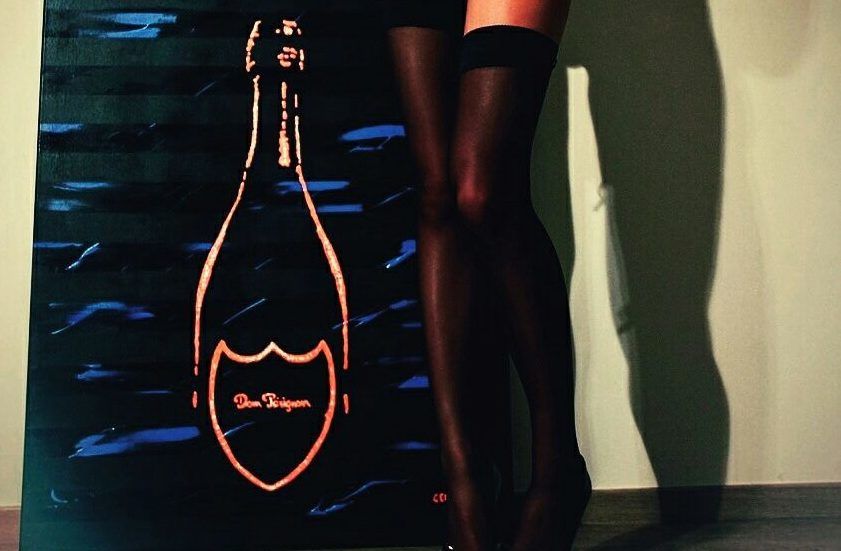 In recent years, Cedric, whose company is Cedric.Art, has gained acclaim for organising exhibitions in Monte Carlo,Belgium, St-Tropez, Paris, London and Marbella. With his major clientele based in Europe, he also sells his works to clients in the USA, the Middle-East and beyond.

On his website, Cedric says, “My style is Contemporary, playing with pointillism and pop-art. This implies that my goal is to make accessible art with a great fun factor – Making a masterpiece into an icon, that’s what fascinates me. Transforming marketing into art.”

The contemporary painter has come under attack by Champagne brand Dom Pérignon. The brand is convinced that his paintings and merchandising – one shirt and one sweater based on his art – could mislead the general public into thinking that Cedric’s items are funded or made on request by Dom Pérignon, Art Insider has reported.

In a bid to make his voice heard, Cedric has gone on to launch www.notdomperignon.com on which he has written his first impressions and the thought that this could be an oversight or mistake been made at the headquarters in Reims, France, Art Insider wrote.

Cedric further underscores his argument by stating: “Attacking an upcoming artist would be setting a strange precedent and sending the wrong message to the art community. This is a mistake that can be resolved.

“A quick reflection on people, companies or brands who are masters in the domain of marketing automatically throws up some famous names in the consumer goods sector.”

The artist added, “There is a clear reason why I only use a few brands in my artwork: these brands are iconic, best in their domain and set the pace for the rest of their industry.  In my opinion they epitomise artisanal craftsmanship and refined marketing.”

Local News Stephanie Horsman - April 5, 2021
In the first of two games being played between Monaco and Metz, Monaco took control, beating their opponents soundly four to nil on Saturday at home in Stade Louis II.

How is Team Monaco faring at the...

Local News Stephanie Horsman - July 27, 2021
The Tokyo Olympic Games are in full swing, and Monaco’s competitors have already started on their quests. Here is the latest on where they stand.