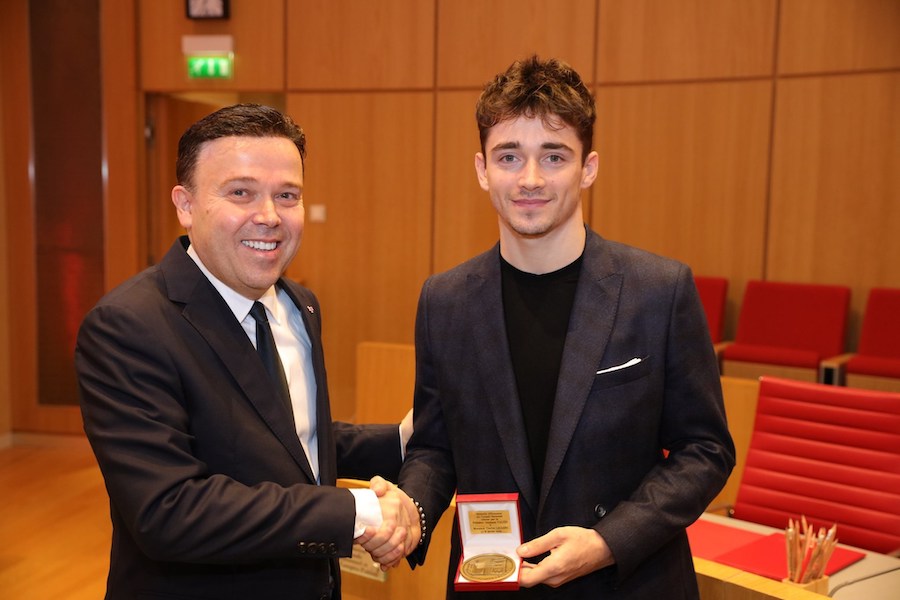 Monaco’s sporting star Charles Leclerc has been presented the Medal of Honour by the President of the National Council Stéphane Valeri.
The ceremony was held on Saturday 18th January in front of elected officials, members of the National Council, their families and the president of the Automobile Club of Monaco. Stéphane Valeri praised the human and sporting qualities of the young Monegasque driver, who placed 4th in the 2019 Formula One World Championship and was a two-time winner of a Grand Prix in 2019 (Spa and Monza), in his Ferrari.


Speaking to Charles Leclerc, who was accompanied by his brother Arthur Leclerc – who has just joined the Ferrari Driver Academy – and his family, Stéphane Valeri explained what had motivated this decoration:
“This Medal of Honour could not have dreamed of a better recipient (…) A medal of honour to crown your results in an exceptional career, which is, however, only in its infancy.
Statistically, the situation is miraculous. We are, barely, 9,300 Monegasques in a population of more than 7 billion 500 million human beings. I’ll let you calculate the chance of having among us a great champion of your stature.”
Mr Valeri continued: “You embody these beautiful red and white values ​​to which we aspire for ourselves and for our children. We are proud of you and, thanks to you, we are even more proud to be Monegasques, by nationality or by heart.”

Mr Valeri expressed the council’s best wishes for the coming season, which starts in March.
Clearly moved by Mr Valeri’s speech, Charles Leclerc thanked the President, adding: “It is an honour for me to receive this medal. I feel, with each race, the encouragement of the Principality and I am happy to wear the colours of Monaco.”