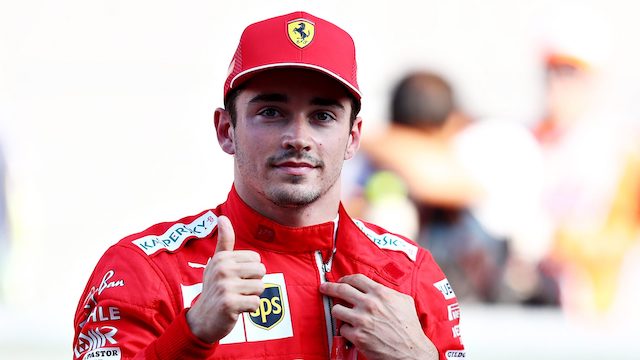 Monaco’s Charles Leclerc will compete in his first F1 Esports race this Sunday, joining an impressive driver line up for the second Virtual Grand Prix.
F1 set up the Virtual GP series after the coronavirus pandemic forced the opening eight rounds of the real-world 2020 campaign to be either cancelled or postponed – including Monaco.
The Virtual GP series is to be held on the weekends when racing should have been taking place, with the Esports series first filling the void of the postponed Bahrain Grand Prix last weekend.
The inaugural race had only two current drivers participating – Lando Norris and Nicholas Latifi – but that number has jumped to five for the upcoming race to include Alex Albon, George Russell and Charles Leclerc.
The F1 quintet will be joined by former driver Johnny Herbert, who finished 13th in the inaugural race in Bahrain, as well as a host of stars including England’s Cricket World Cup Winner Ben Stokes, with more names set to be announced in the coming days.
“A star-studded grid is shaping up with our F1 stars – past, present and future – as well as huge names in sports and entertainment,” Julian Tan, F1’s Head of Digital Business Initiatives and Esports said. “We look forward to providing some light relief through esports as we all navigate through these difficult times together, where our fans can engage with our sport in a different but familiar way.”
This weekend’s Grand Prix will take place on the Albert Park track, home of the Australian Grand Prix, on the weekend originally scheduled for Hanoi’s inaugural street circuit race in Vietnam.
The Vietnam circuit is currently not available on the official F1 2019 video game so the drivers will instead show off their skills on the Melbourne track. Drivers will join the race remotely, with a host broadcast live from the Gfinity Esports Arena from 9pm local time on Sunday 5th April.

First Race of the year coming up this week-end ! I will do my first ever Virtual Race this week-end organised by @F1, and I like this line up ? @arthur_leclerc7 pic.twitter.com/6r5Fenzyil

Charles Leclerc’s participation has come as a surprise to many, considering the Monegasque hasn’t shown any inclination towards sim racing or the Esports event in general. Perhaps it’s the 22-year-old’s way of igniting a new fan base among today’s tech-savvy youth.
That means we will see Leclerc, who enjoyed a superb debut season in red, in a Ferrari, Albon making his Esports debut in a Red Bull, Norris looking to make his mark again in a McLaren, and Russell and Latifi racing for Williams.
The broadcast will be available on F1.com, and the official Formula 1 YouTube, Twitch and Facebook channels. It is expected to run for 1 hour 30 minutes, with a qualifying period where grid positions will be determined based on the drivers’ fastest lap time, followed by a 28-lap race. The Virtual Grand Prix will also be broadcast live with international broadcast partners Sky Sports F1.