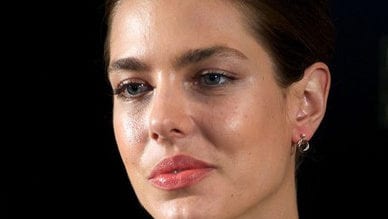 “I find it unacceptable that they take over my private life. That I can be observed at any time, my private life scrutinized. It’s a breach of my personal freedom.”

The granddaughter of Grace Kelly has no presence on social media yet can be found regularly in the gossip magazines which dissect her love life (and that of her mother). “Today we live in a society of obscenity, of staging one’s life … I believe that not disclosing oneself is a form of good etiquette.”

The Princess, an accomplished equestrian – “With the horse, you are not in a relationship of power, but a relationship of trust” – is a regular fixture at Jumping International held annually in June in the Principality, but her other passion is philosophy. She has been published in the French daily, Liberation, writing a book review on the “Défense du secret d’Anne Dufourmantelle” with a byline “Charlotte Casiraghi, President of Les Rencontres Philosophiques de Monaco”, an association she founded in 2015.

Les Rencontres holds a series of monthly workshops with guest speakers in different locations across Monaco from October to April. The theme for 2016-17 is “The Body”. The next conference – “Quels maux pour le corps? Le corps souffrant” – takes place Thursday, November 17, at Théâtre des Variétés, from 7 to 9 pm.

A full schedule can be found on Les Rencontres Philosophiques de Monaco website.

Ludovic Schultz, Head of the French Delegation, representing HE Xavier Sticker, and Cyril Gomez, Head of the Monegasque Delegation. Photo: Manuel Vitali/DC[/caption] The handover took place on December 13 between the outgoing Presidency and the incoming Presidency of the Pelages Agreement, provided by Monaco in the person of Cyril Gomez, Director General of the Department of Public Works, Environment and Urban Development. Cyril Gomez, Head of the Monegasque delegation, succeeded HE Xavier Sticker, Head of the French delegation, and will hold the Presidency for the next two years. The objective of the Pelagos Agreement is to protect marine mammals and their habitats from any threat of human origin. The Sanctuary is a maritime area of 87,500 square kilometres and represents the largest marine protected area in the Mediterranean and the only international marine area dedicated to the protection of marine mammals.