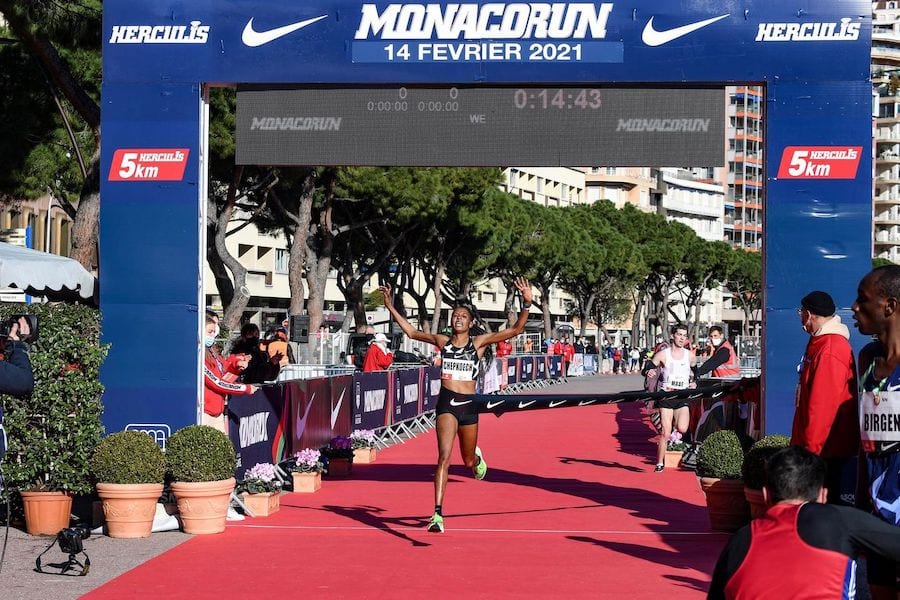 Beatrice Chepkoech smashed the 5km world record on Sunday at the Monaco Run, finishing the race in an astounding 14 minutes and 43 seconds. Joshua Cheptegei won the men’s 5km for the second year in a row, but was unable to best his time from last year.
Kenyan runner Beatrice Chepkoech surpassed the previous world record for a 5km race set by Caroline Kipkirui in a 2018 mixed gender race by five seconds, one second faster than the record for a women-only race set by Sifan Hassan.
Until Chepkoech’s performance at the Monaco Run, Hassan’s 14 minutes 44 second time was the fastest ever recorded since the introduction of the 5km as a world record event in 2017.
“I was so happy because I didn’t expect it,” 29 year old Chepkoech said. “It was cold and there was a lot of wind, but I tried to follow my pace-maker and everything was perfect.”
Meanwhile, Ugandan runner Joshua Cheptegei had a marvellous performance as well, crossing the finish line in Monaco with a 5km time of 13 minutes 11 seconds. This was a strong finish, but didn’t touch his previous efforts in the Principality, where last year he came in at 12 minutes 51 seconds, setting a world record.
“I knew that I had to run the best way I always run. I did not want anything to distract me. I just ran to defend the title,” Cheptegei said after the race. “I expect to become great this year or even more,” referring to his current training regime, preparing him for the upcoming Olympic Games in Tokyo.
This has been a banner week for the World 5,000m and 10,000m record holder, who was named his country’s tourism ambassador by the Uganda Tourism Board on Wednesday.
Cheptegei said he was deeply grateful to be given the “huge responsibility”.
“I look forward to sharing my Ugandan story to the rest of the world. In the same breath, I wish to call upon every Ugandan, especially those in the diaspora, to make it a point to visit and discover more about this our country,” he added.