More than 300 guests attended the fourth annual China Night held at the Monaco Yacht Club on the last day of September. The event, now a fixture during the Monaco Yacht Show, was help under the auspices of the Embassy of Monaco in China and Monaco’s Tourism and Convention Authority.

In his welcome address Mr Bernard d’Alessandri, Secretary General of the Yacht Club of Monaco, said that Monaco and China are coming closer together to embrace the world of yachting. HE Mrs Catherine Fautrier, Ambassador of Monaco in China and Mr Alexander Heng, CEO of Blu Inc Media, then thanked the guests for their loyalty and their enthusiasm.

The “Monaco Week” held in China and the mirror event “China Night” help to build more intense relations between the two countries and deepen exchanges on the economic, tourism, environmental and cultural levels. In addition to the Tourism and Convention Authority, China Night’s partners were the Prince Albert II of Monaco Foundation, Monaco Yacht Show, Société des Bains de Mer de Monte-Carlo, Monaco Yacht Club and the Economic Board.

For the second consecutive year, Isabell Kristensen, offered a parade themed “Beauties of the Mediterranean”, with 20 models presenting a new collection in a world premiere.

Local News Staff Writer - July 18, 2018
The 70th Gala of the Monegasque Red Cross will take place on Friday, July 27, in the prestigious setting of the Salle des Etoiles 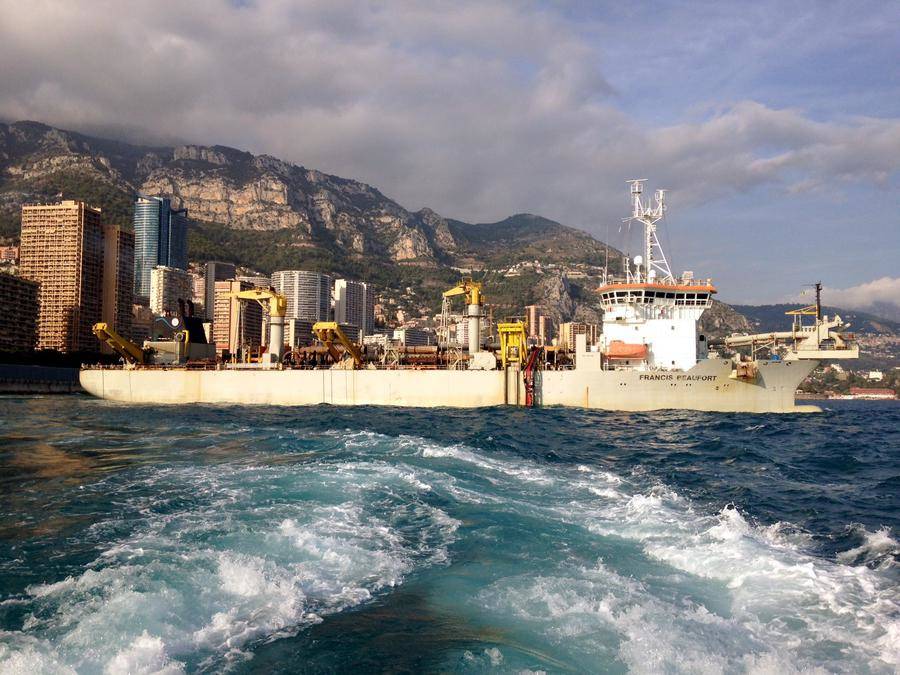 François Beaufort. Photo: DR[/caption] The land extension project at Portier Cove is now entering a new phase, the dredging of unpolluted marine sediments, which will be then deposited off Monaco in a zone chosen for this purpose. In recent days the ship "Francis Beaufort", a dredger of 140 metres in length, has been sucking up sediment at the rate of approximately 11,000 cubic metres of a seawater and sediment mixture per hour. Nearly 400,000 cubic metres of sediment will be removed by the end of November. The dredging phase follows several operations to relocate marine plants and other fauna to protected areas in order to minimise the environmental impact of the project. The next stage, starting in December, will involve the laying of the backfill on which the caisson foundations will rest.