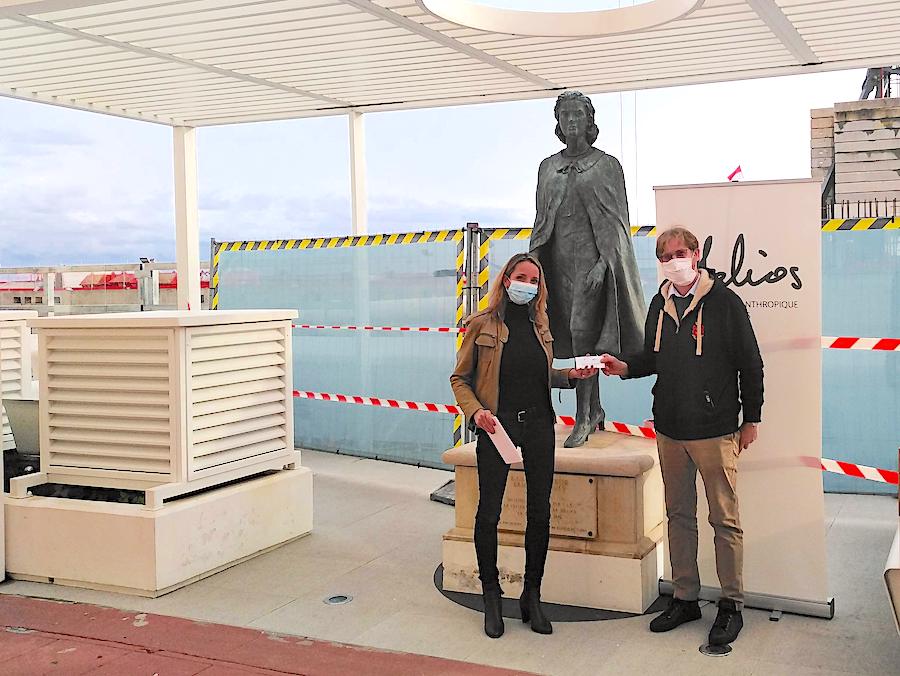 The Stelios Philanthropic Foundation has donated €50,000 worth of vouchers to the Princess Grace Hospital staff.

The 2,000 workers at the Princess Grace Hospital in Monaco have received an early Christmas present in the form of gift vouchers handed out by the Stelios Philanthropic Foundation on Wednesday.

“A small thank you gift to those on the front line of this pandemic, with our best wishes for a merry Christmas and a happy new year,” said Stelios Haji-Ioannou in a note accompanying the gift.

Every staff member received a booklet with vouchers issued by the company Eden Red for €25. This end of year treat comes on the heels of a similar donation made by the foundation in May of this year.

Mr Haji-Ioannou is best known for being founder and part-owner of low-cost airline EasyJet and its off-shoots. The Greek-Cypriot entrepreneur set up his foundation to “support a diverse range of charitable activities, primarily in places where (the founder) has lived and worked – the UK, Greece, Cyprus and Monaco.”

Manon Fleury: “This is the future of gastronomy”

We catch up with Manon Fleury, new head chef of Michelin-starred Elsa and part of a new generation of chefs who combine fine dining with a full respect for nature and the land.

Over 12s called up for vaccination

Teenagers are now eligible for vaccination in Monaco as the government pushes to inoculate as much of the population as possible, which currently stands at 55%.

Stricter Covid rules to come into play from Saturday

Faced with a rise in Covid cases, primarily among the young and unvaccinated, Monaco is ramping up health measures again, including widespread mask wearing and new health pass rules.

A pub in Nice has been transformed into a temporary vaccination centre, helping around 450 local staff to get the jab before France implements its mandatory health pass.

The circulation of Covid-19 throughout Monaco continues its worrying upward trajectory, as France declares that the “fourth wave has begun”.

From Wednesday, a health pass will be mandatory in France for access to leisure and cultural venues with more than 50 people. So, what does that mean for Monaco residents?

Lifestyle & Wellbeing Cassandra Tanti - May 9, 2021
Health authorities have taken stock of the progress of a new psychiatry day centre for youth in Beausoleil. The much-needed establishment is due for completion by next September.

Lifestyle & Wellbeing Cassandra Tanti - October 3, 2019
Two of Monaco’s finest restaurants, Louis XV and Ômer at the Hotel de Paris, are offering incredible deals this month as part of the ‘Tous au restaurant’ campaign, giving diners an opportunity to feast like a king for half the price. The campaign was initiated by Alain Ducasse 10 years ago and this year involves more than 140 restaurants in the PACA region and Monaco alone, with thousands more taking part across the country. The aim is to give people a unique opportunity to “discover, or rediscover, the diversity, vitality and creativity of the tables de France”. [caption id="attachment_38924" align="alignnone" width="900"]

Photo: Louis XV © pmonetta, courtesy SBM[/caption] For 15 days, diners can experience starred restaurants, contemporary bistros and lively eateries with the same promise: "Your guest is our guest". The chefs of each establishment compose a special menu and the second person dines for free. In Monaco, Alain Ducasse’s three-Michelin starred restaurant Louis XV is proposing a set four-course menu for only 165€, including dishes such as fresh langoustines with almonds, pomegranate and ginger, and wild duck breast with figs, sorrel and nuts. Unfortunately, Monaco Life has been informed that the Louis XV 'Tous au restaurant' is fully booked. Alain Ducasse’s second restaurant, Ômer, is also participating in the campaign and there are still reservations available. Situated on the garden level of the new Rotonde wing of the Hôtel de Paris Monte Carlo, the restaurant’s chefs Patrick Laine and Alain Ducasse present a menu that embodies the rich diversity of Mediterranean influences. The ‘Tous au restaurant’ offering comprises mezzes, main, dessert and beverage for two people priced at only 55€. Normal menus at Ômer range from 130€ to 1,500€.   [caption id="attachment_38925" align="alignnone" width="900"]

Photo: Ômer © pmonetta, courtesy SBM[/caption] The ‘Tous au restaurant’ campaign has been a huge success, with more than 250,000 online bookings at 1,750 participating restaurants in 2018. This year, the organisers have upped the ante, bringing together more than 2,000 participating restaurants in an effort to accommodate even more people, all over France. ‘Tous au restaurant’ runs from 30th September until 13th October. Bookings are essential and can be made at: https://tousaurestaurant.lafourchette.com