It has just been announced that the Clubhouse in Gustavia will reopen on December 12. However, until a few post-Irma “short-term inconveniences” can be ironed out – no air conditioning, no washing or bathroom facilities, and drinks will be served in disposable cups – opening hours will be limited to between 6 pm and 9 pm.

Meanwhile, on Monday, December 18, the Commodore is hosting a soirée in Monaco for Gustavia Yacht Club members from 6:30 pm to 9 pm.

Over Christmas drinks and canapés, the gathering is to bring together those members of the Club who have not left yet for warmer climates ahead of the holiday season and to celebrate the New Year.

Updates will be given on the preparations to open the Clubhouse in Gustavia, on the status of the IRMA disaster relief fund and the latest on reciprocal arrangements with other Yacht Clubs.

Gustavia Yacht Club also hosted a joint event with the Manhattan Yacht Club in New York on December 6, represented by Treasurer Ken Griggs and interim Club Manager Celia Meralikan, who is now in St Barts in an attempt to open the Clubhouse as early as possible.

Minister of State in NY for UNGA 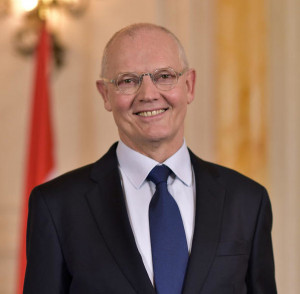 HE Serge Telle, Minister of State. Photo: gouv.mc[/caption] HE Minister of State Serge Telle has told Russian news outlet Sputnik that he will accompany Prince Albert on his October visit to Moscow, during which meetings with Russian President Vladimir Putin and other top officials are planned. “I will accompany the Prince to Russia on October 6 in order to open a big event at the Tretyakov gallery about the historic links between the Romanovs and the Grimaldis, the Monaco royal family. We have worked quite hard on the history of the two royal families,” HE Telle said on the sidelines of the United Nations General Assembly in New York last week. “We will see President Putin and many officials.” When asked whether Monaco is considering increasing cooperation with Russia, Telle replied, “Yes, we have ideas but we will discuss it during the visit.” The minister also described the present relations between the two countries as “very good”. The Minister of State also told Russian media outlets that although Monaco has taken in a small number of refugees, the Principality has no plans to take in more. “The size of our territory and our population do not allow (us) to take hundreds of thousands of refugees… our part is very symbolic,” he commented. HE Telle had earlier told the General Assembly that although Monaco is responsible for a small portion of global emissions, the country has the ambition to be a leader in energy innovation. Monaco also has committed to reduce greenhouse emissions by 50 percent from 1990 levels by 2030.

Local News Stephanie Horsman - March 9, 2021
“A great reaction from the team!” exclaimed Coach Niko Kovac after his Red and Whites beat OGC Nice on their opponent’s home turf in the third Côte d’Azur derby this season.