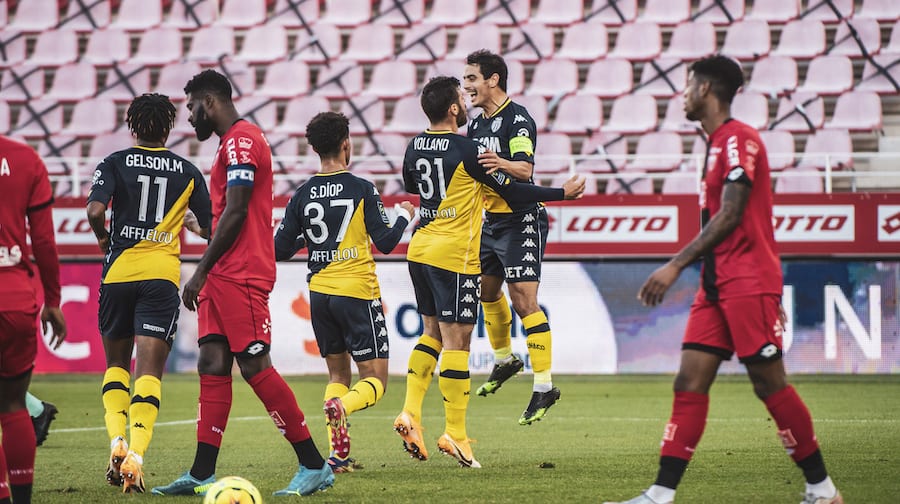 A much-needed win has put AS Monaco and their fans in jolly spirits as the team took a 1 to 0 victory against Dijon on the weekend.
It was a razor-thin win, but a win nonetheless for the Red and Whites of Monaco on Sunday, who got a three-point boost in the Ligue 1 standings, putting them in seventh place and breaking a three-game losing streak.
The only goal of the game came early on as Kevin Volland at the 15-minute mark took the ball straight up the middle, passing to Wissam Ben Yedder, who shot it quickly back to Volland. Volland took advantage, knocking it between the poles, beating out Dijon goalie Anthony Racioppi.
It made the sixth goal for Volland so far this season, and the third with an assist from his team’s captain.
“The important thing was to win,” said Coach Niko Kovac with a rare smile. “I would say that this assist is like half a goal for Wissam. He fulfilled his role of leader, and his performance was very positive. He pulled the team over the top today.”
Kevin Volland saw it much the same way, citing team effort as the tool for success.
“It’s a one touch style which reflects the quality we have on this team and I think it’s an important goal for us today. It symbolizes the relationships that are created between us,” the German striker said modestly.
The win makes for a tight race in the all-important top third of the standings, where Monaco is only one point behind Montpellier and two behind Rennes.
“Before this match we had four wins in a row followed by three defeats,” said Kovac . “The most important thing was to win. I told my players before the match that Dijon was under pressure, and that we had to get a result. It may not have been our best game of the season, but we went for a positive result. We have shown character. I congratulate them for their state of mind. We’ll take the three points.”
The Red and Whites still have one more match before Christmas, where they play St-Étienne at home in Stade Louis II on Wednesday 23rd December at 8pm.