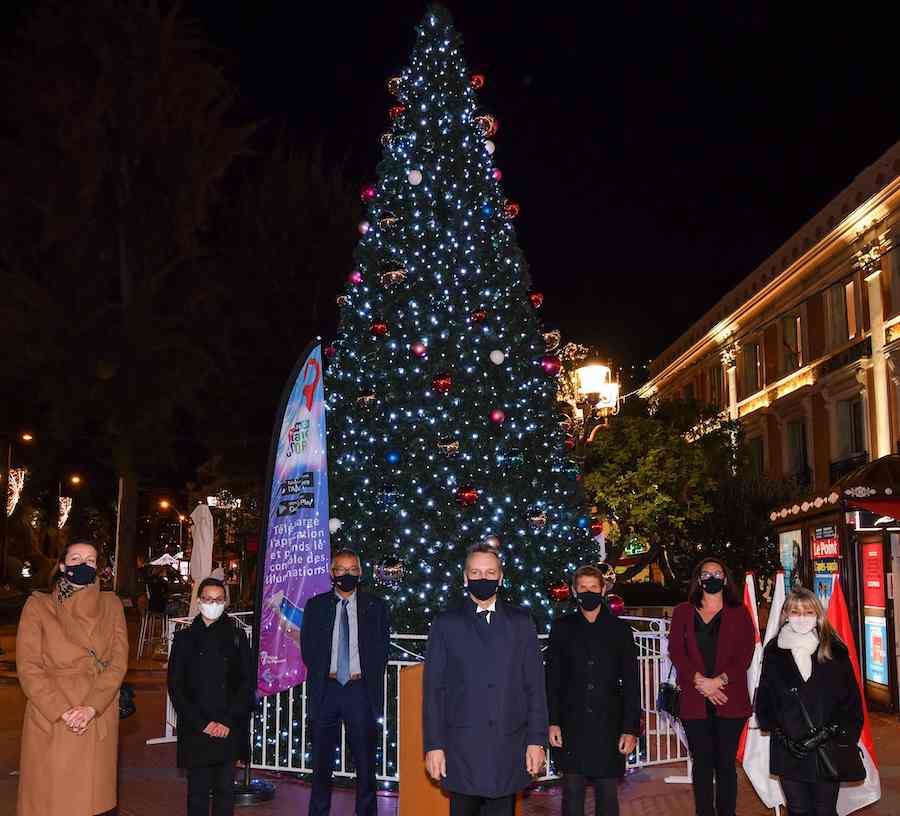 The symbolic turning on of the Christmas tree in Place d’Armes has marked the official start of the festive season in Monaco, with thousands of sparkling white lights and colourful decorations bringing some much-needed cheer this unprecedented year.
Covid may have cancelled the public Christmas light celebration, but Mayor Georges Marsan and members of the Communal Council were still able to kick off the city’s illuminations on Friday evening at the foot of the giant Christmas tree.
The Animation Department has spent the past two months decking out every department in the Principality with a range of illuminations. There are now more than 700 lights brightening up the streets, as well as 19 festive projections.
Once again this year, the public will be able to interact with the illuminations and installations scattered throughout the Principality.
The first, called ‘Playmagic’, uses augmented reality technology to allow people to photograph themselves with Santa Claus in front of the sparkling decor or to play with different characters.
Meanwhile, ‘Playcolor’ gives people an opportunity to change the colour of certain illuminations.
For several years now, Monaco has worked with Blachère Illumination to make the Christmas illuminations as ecological and sustainable as possible. Only 100% LED and eco-designed decorations are used, while the structures are 100% biodegradable and made from sugar cane and recyclable aluminium. The electric fairy lights will also be collected and recycled after use.
The illuminations are controlled by the City’s Animation Department using an intelligent remote-control system. In order to reduce light pollution and save energy, a large majority of illuminations will go out every night between 2am and 6am with the exception of 24th, 25th and 31st December.