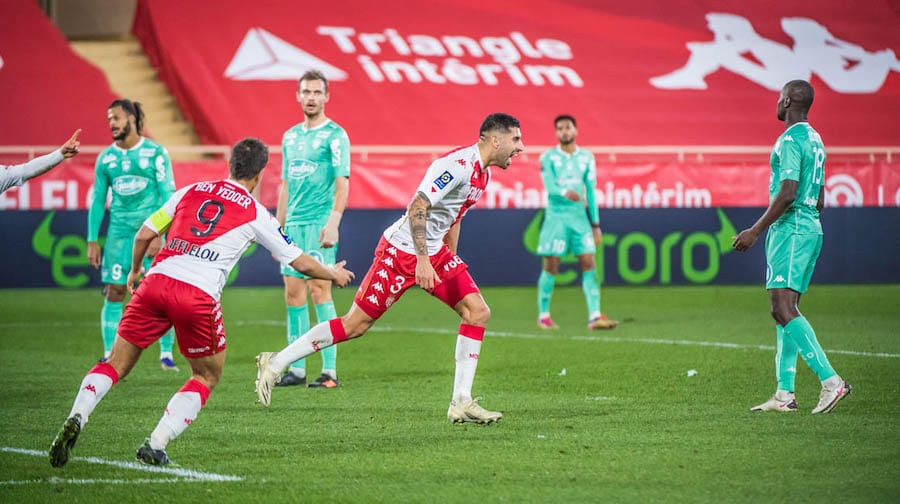 The Red and Whites secured a huge 3 to 0 victory over SCO Angers on Saturday, catapulting them into a solid fourth place in the Ligue 1 standings and putting a rare smile on Coach Niko Kovac’s face.
For the 19th matchday of Ligue 1 and the first game of the New Year played at home at Stade Louis II, AS Monaco performed like a dream team, crushing Angers 3 to 0.
In a match where they dominated from the get-go, Coach Kovac changed up his defense slightly, notably with the return of Benjamin Lecomte as goalkeeper and putting Djibril Sidibé in the right back spot. Otherwise, he chose a “classic six” for the front, a strategy that worked well for the team.
Though the points don’t show it, the Red and Whites were the ones who had primary possession of the ball in the first half. It took until the end of the first half to see the opening goal, when Chilean defender Guillermo Maripán made a close range shot that eeked past Anger’s goalie Paul Bernardoni at the 40 minute mark.
After the break, and well past the hour mark, there was a bit of excitement when Angers’ Ismaël Traoré made a shot to the corner which was brilliantly stopped by Lecomte. Minutes later, Monaco fought back with a Kevin Volland goal, his ninth this season, making the score a cool 2 to 0.
Finally, it was Stevan Jovetić, freshly on the pitch replacing Wissam Ben Yedder, who made the third and final goal, beautifully assisted by Volland.
“It was our best match of the season, it’s arguably the most complete overall,” Coach Kovac said after the game. “It was a great game. We did some good things in transition, in our pressing. We were very well organised and structured. We had possession of the ball. We deserve the victory, so yes I’m very happy.”
The coach, delighted with the result, knows that they can’t rest on their laurels, though. “We have to keep grabbing the top spots, but it’s not an easy thing,” he went on to say. “We are on the right track. If we play the next matches 100% like tonight, we can claim the first five places. We are happy with the victory, but it’s only half-way through the season. My players can still improve, thanks to work.”
Fans can see that hard work in action when Monaco faces Montpellier at an away game on Friday 15thJanuary for the first match or the season’s second half.

Written by Stephanie Horsman with a press release from AS Monaco