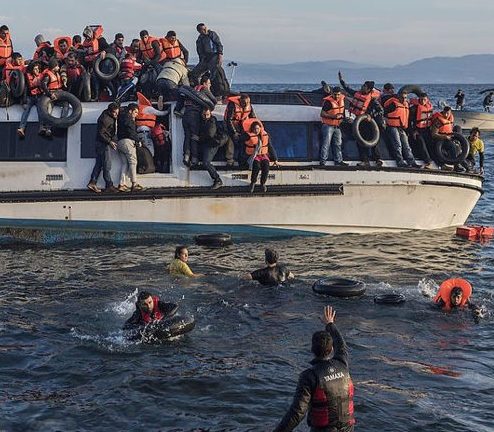 In 2013, Chris and Regina Catrambone, who live in Malta, chartered a boat travelling around Lampedusa, Sicily and Tunisia. “Our captain was a retired Officer of the Armed Forces of Malta who used to work on search and rescue at sea,” Mrs Catrambone, MOAS Co-Founder & Director, recalled. “When I saw a winter jacket floating in the sea, he pointed out that this probably belonged to an immigrant who drowned.

“The Pope visited Lampedusa soon after our visit and launched an appeal on TV to citizens of the world to lend their contribution to this issue. We felt personally compelled to take heed of his message.”

By the following year, the Catrambones had invested $4 million and bought a 40-metre ex-fishing boat and fitted it out with tenders and a flight deck with two state-of-the art drones carrying night vision and thermal imaging cameras. When boats carrying immigrants are found, the Phoenix informs the nearest national authority, which should send a vessel to transport them for landing in the nearest non-African island.

October 2014 saw completion of the first mission by their “Migrant Offshore Aid Station” (MOAS) and the non-profit organisation began operating in the Central Mediterranean, rescuing and assisting in the rescue of over 33,000 people.

MOAS says that the route is becoming “increasingly dangerous”, and over the first six months of 2016, they report a 67% increase in migrant deaths in the Mediterranean compared to the same period in 2015.

On Thursday, February 2, British band Coldplay announced that they will endorse MOAS as long-term patrons in aid of its humanitarian work with migrants and refugees.

“Every year, MOAS rescue thousands of people who risk death at sea while searching for a better life. But for an accident of geography, those people could be us and we could be them. For this reason, we’re proud to support MOAS’ life-saving work,” said Chris Martin.

Mr Martin made the announcement with the launch of fundraising film entitled “Rescue Humanity”, which features the Coldplay frontman singing an a cappella version of “Don’t Panic” over real footage from a recent MOAS rescue that was filmed by Adam Broomberg during his time on board. The film aims to “give the viewer an immersive experience of a rescue and show the fear, hope and anguish experienced by the refugees and migrants MOAS rescue”.

“We are very grateful to Coldplay for believing so strongly in our cause,” said Mrs Catrambone. “MOAS is a young organisation that in a few years has managed to make a significant difference in mitigating one of the most heart-breaking humanitarian tragedies of our era. However, there is still so much to be done. Coldplay’s support will allow our work to reach the hearts of a wider audience worldwide.”

The International Organisation for Migration estimates that last year, 1 in 29 migrants and refugees have died attempting the Central Mediterranean crossing.

For more on MOAS or to make a donation, see their website. (Feature photo: Photo: Ggia)

Screening and exhibition in one at National...

Local News Staff Writer - September 27, 2018
Two experts, a geologist and a naturalist, came to visit the eight sites that make up the cross-border perimeter of Mediterranean Alps.