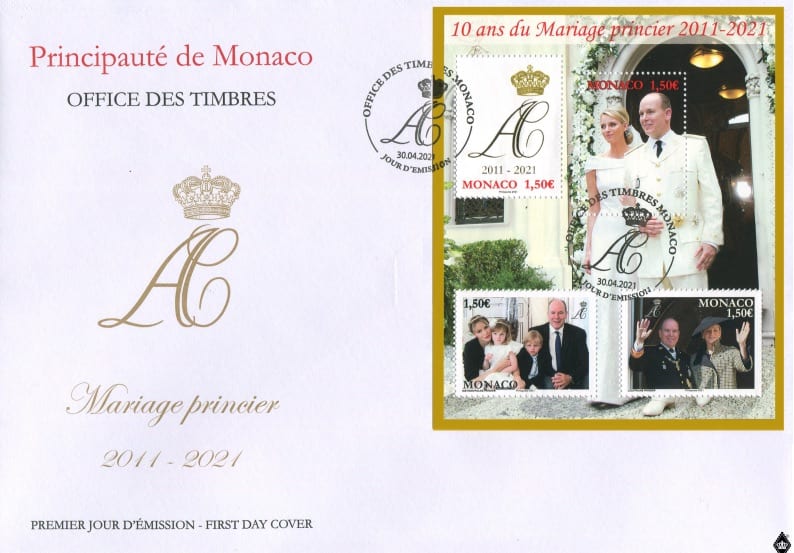 Monaco Poste has released a quartet of new stamps to celebrate the 10th wedding anniversary of Prince Albert II to Princess Charlene, including an adorable one featuring the twins.

Four new stamps are now in circulation in the Principality marking a decade of marriage for the Prince and Princess.

The first stamp features the couple on their wedding day with a beaming Prince Albert next to his stunning bride. Another is a photo of the Prince and Princess waving from a balcony of the Palace. The third is a graphic stamp that features the first initials of the couple nestled next to each other with 2011-2021 across the bottom.

In the final one, six-year-old twins, Prince Jacques and Princess Gabriella, try their best to sit still as their bemused parents smile for the camera. The effect is both intimate and charming, showing a casual warmth between the members of the family.

The complete set of the commemorative stamps cost 6.00€.

The stamps are a wonderful complement to the one that came out in April featuring the entire Princely family in an official photo. This more formal shot of the family shows the Prince and his son in matching blue suits and ties, with Gabriella in a sweet pink frock with a gingham check overcoat. The Princess is a showstopper, wearing a long white Grecian gown with a beautiful and unique collar around her neck.

Both sets of stamps can be purchased from the Monaco Office des Timbres.

Prince Albert II wed Charlene (née Wittstock) in a civil ceremony in the Throne Room of the Princely Palace on 1st July 2011. This was followed up the next day with a religious ceremony that took place in the Palace courtyard and was presided over by then Archbishop Bernard Barsi.

The couple welcomed their children into the world on 10th December 2014, where upon Hereditary Prince Jacques became the next heir to the throne.