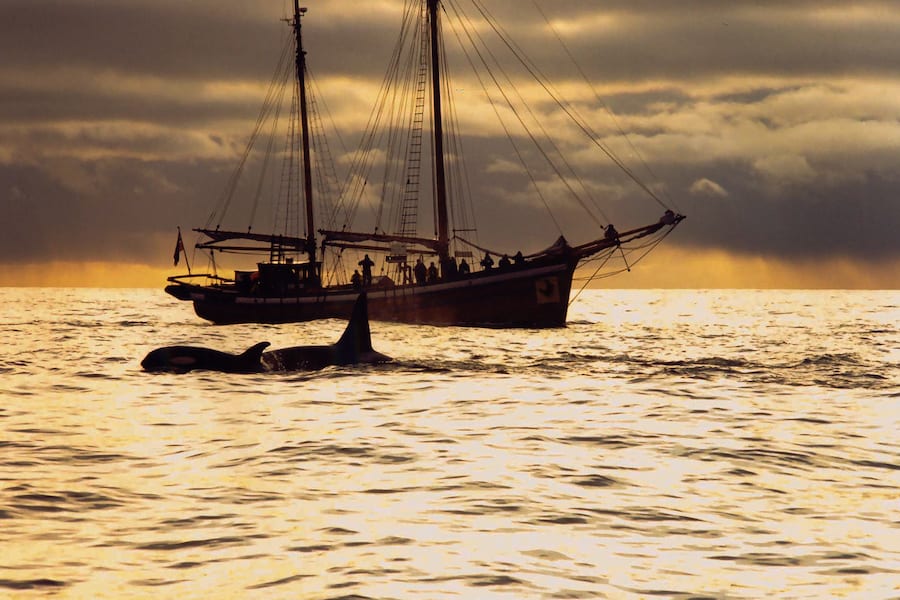 Pierre Robert de Latour, aka the Orca Whisperer, talks to Monaco Life about the healing sound of orcas.
Pierre Robert de Latour may have a background in biochemistry, but he has been working with orcas for over 20 years. The founder of USEA (Undersea Soft Encounter Alliance) and Cetody has more than 6,000 dives under his belt with killer whales.
Orcas are one of 90 species of cetaceans – dolphins, porpoises and whales – and they have a complex way of communicating with vocal and body language, as well as emotional communication, suggests Pierre. They have magnificent structured bodies and can travel at speeds of up to 60 kilometres per hour with endurance. When they move through the water their vocalisations actually change the shape of the water. After so many years working and diving with orcas, Pierre started to realise the healing benefits of their sound waves. Through these amazing experiences, he has been fuelled to create a unique method of healing called Cetody.
In this interview, we unfold the story behind Pierre’s discovery of how orcas echolocation sounds can seemingly heal, detoxify and improve the health and wellbeing of humans as well as each other. Pierre’s wellness facility project located in France is based on the alternative medicine known as sound therapy. The technique of sound healing using instruments such as tuning forks and Tibetan bowls has been around for centuries. Pierre’s facility offers this alternative approach to healing but with a twist – the sound of orcas. He has combined his own experiences, knowledge, science and advanced recording devices to offer people the opportunity to feel and heal with the sound of orcas.
Monaco Life: Pierre, can you tell us about Cetody and Cetosonotherapy (CST)?
Pierre Robert de Latour: Cetody is the commercial name of my concept using Cetosonotherapy, which is a technique to heal people. Cetosonotherapy is a holistic method of care that uses the therapeutic virtues of sounds produced by cetaceans. It is part of alternative medicines using the therapeutic properties of sounds that include Sonotherapy (tuning fork, Tibetan bowl…) and Musicotherapy, and is based on the fact that cetaceans have developed the ability to use sounds in the liquid element to communicate between themselves, to locate their prey and also to heal themselves – knowledge that they have been transmitting from generation to generation for millions of years.
Can you tell us about a unique healing experience you have personally experienced while diving with orcas?
My strongest experience was during my first attempt at recording the songs of whales and orcas in Norway. It took place after dark. With some crew members, we stopped our boat in the middle of a fjord. We could hear the breaths of cetacean right next to us without being able to see them. When I plugged in the hydrophone, I was mesmerised by the beauty of these songs, by their depth. It was an unforgettable, almost mystical experience. We remained silent, stunned. We looked at each other without being able to speak. Everyone was crying on the boat; beautiful tears of radiant happiness. No one felt the biting cold any more. Orcas and whales were celebrating. What were they celebrating? I still do not know. But these songs that rose from the depths were like a symphony. The symphony of the abyss that healed our souls.
You mentioned during our last interview that after 22 years of expeditions with orcas, you believe that they can change and heal us. Can you describe exactly what you mean by that?
This is truly a remarkable point that I have noted over the years. I have guided more than 1,500 snorkelers in underwater close encounters with orcas and whales. Like me, these people all came with their own life experiences, their questions, and their scars. We maintained strong bonds, even when the adventure was over. For the most part, these people have seen their lives changed, and what is notable is that these changes are always in the direction of the “better”. Doubts give way to clairvoyance; choices are more obvious; scars disappear; the pain subsides whether moral or physical. It is this observation that made me seek a reason for these changes, and which made me hypothesise that everything comes from sound.


What do you believe are the benefits of Cetosonotherapy (CST)?
Cetosonotherapy is applied in addition to allopathic diagnosis and modern medicine and, depending on the technique of care applied,
– relieves physiological and psychological imbalances,
– maintains one’s life force, natural balance and youth,
– regenerates tissues, repairs and rejuvenates cells,
– eliminates toxins,
– prevents the appearance of pathologies by strengthening the immune system,
– can accompany pregnancy (preparation for childbirth), menopause or andropause,
– improves sleep, relaxation, general well-being,
– reduces stress, anxiety, tinnitus, phobias, depressive syndromes, some cases of autism,
– promotes concentration,
– increases physical and sports performance (individual and team), and the libido.
Once your centre is up and running, what would a CST session consist of?
The sounds used in CST are specifically selected according to my experience for their beneficial effects and come from the following species: orcas, humpback whales, false orcas, dolphins, and sperm whales, recorded with Aquarian Audio hydrophon H1A (1 Hz to 100 KHz), PA1-PIP buffer amp and Zoom H1 Handy Recorder in wav files.
These sounds selected during our tests are called the Healing Cetaceans Sounds (HCS) and their application is achieved through three different Cetosonotherapeutic techniques:
– Cetaceans Sounds Meditation (CSM) involves arranging patients who are lying down in a circle around an acoustic speaker producing the SCR;
– Vibratory Contact Care (VCC), where the principle is to apply the HCS directly in contact with the skin of the patient in specific areas by means of a vibrating speaker. HCSs spread directly in the body;
– Immersive Sound Massage (ISM), where the patient is positioned in a pool or spa with an immersed underwater speaker producing HCS. The sounds propagate in the liquid element at a speed of 1440 m/s due to the density of the water (330 m/s in the air) and reach the target tissues and organs of the organism producing their repairing effects.
What message do you have for our readers that can benefit the lives of orcas?
We are spending billions of dollars exploring the stars, looking for some form of extra-terrestrial intelligence, yet beneath the surface lives a brilliant civilisation: cetaceans. We know they are intelligent, that they have a language, but we do not know what they are saying to each other, nor what they are trying to tell us.
We must protect our oceans. Let us protect these magnificent creatures that inhabit them. Let’s discover the secret of their language and access their knowledge. We will then be able to heal ourselves thanks to the song of cetaceans.
The inventor Nikola Tesla used to say: “If you want to unlock the secrets of the universe, you have to think in terms of vibration, frequency and energy”.
I, Pierre the orca whisperer, have a message for Elon Musk: if you want to unravel the secrets of the universe, you have to understand the language of orcas, whales and dolphins. Because, for millions of years, they have already thought in terms of vibration, frequency and energy.