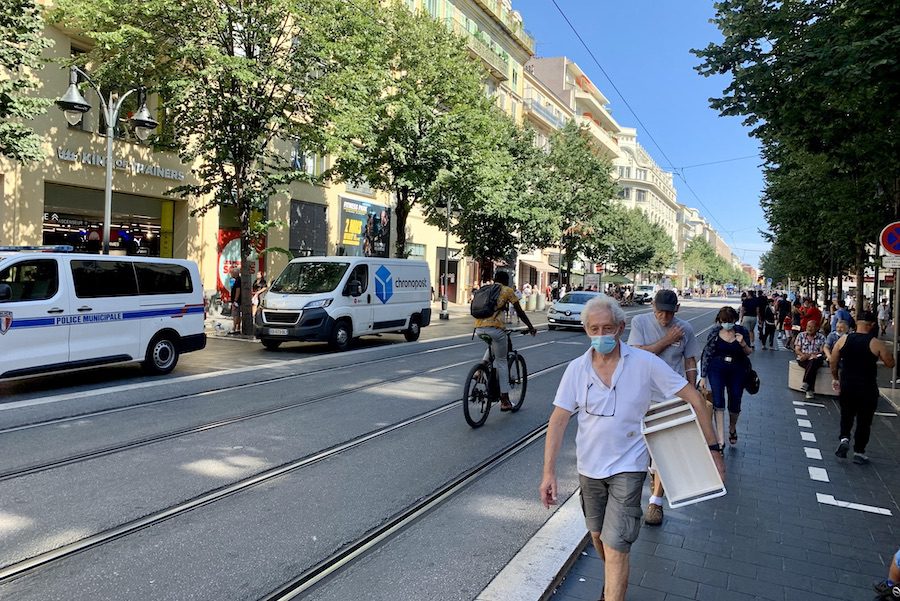 Just two months after the rule was lifted, the Prefect of the Alpes-Maritimes on Sunday announced that masks must now be worn outdoors until at least 16th August. This applies at all covered and open-air markets, public roads, car parks, and events. People at the beach, in a park, or undertaking a sports activity are not required to wear a mask.

Meanwhile, Prefect of the Alpes-Maritimes Bernard Gonzalez overruled a ban by Mayor of Nice Christian Estrosi of all amplified and live music on terraces and beaches from Sunday, saying in a statement that the prohibition order “does not concern the festivities organised at the initiative of public authorities, nor the cafes, bars and restaurants and their terraces, where health protocols apply.” Estrosi was also forced on the weekend to backtrack on mandatory Covid-testing and health passes for children in holiday centres.

It comes as the incidence rate continues to sky rocket in the French region, particularly among 20 to 29 year olds. The prefect has also banned the consumption of alcohol in public places.

The aim is to curb the “extremely worrying” incidence rate in the French region, where the Delta variant now accounts for 91% of cases. The incidence rate has reached as high as 459 per 100,000 inhabitants on Monday 26th July, while the positivity rate among those being tested for Covid is 6.5%.

According to Covid-tracker, the incidence rate among 20-29 years olds in the region is a staggering 1,866, while all age groups are seeing a rise in circulation.

Previous article“We’re looking for evolution, not revolution”
Next articleHow is Team Monaco faring at the Olympics?
Cassandra Tanti

Lifestyle & Wellbeing Stephanie Horsman - December 28, 2020
Whilst European governments have been making big waves about their new Covid vaccination programmes, France has opted for a more discreet roll out.

Lifestyle & Wellbeing Luke Entwistle - January 14, 2022
The WHO has approved two new drugs to treat the Covid virus, including an existing arthritis medication. It comes as the organisation predicts that half of all Europeans will contract the Omicron variant.