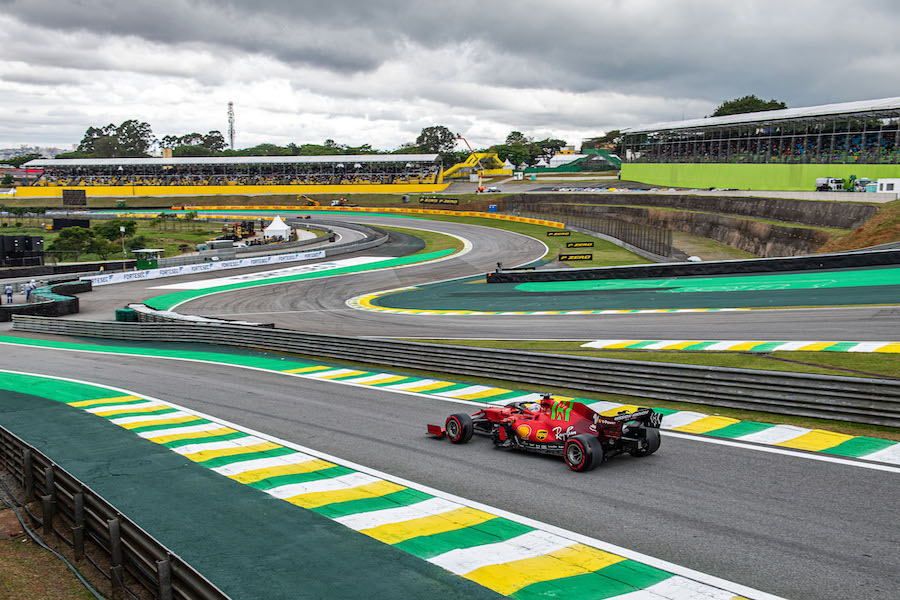 Charles Leclerc secured a fifth place finish at the Interlagos circuit in São Paulo, Brazil, to consolidate Ferrari’s third place Constructors’ Championship standing. The drama, however, took place out-front as Hamilton overtook Verstappen late-on to take an unlikely victory, having been demoted to the back of the grid earlier in the weekend.
This race weekend threatened to be dominated by off-track incidents, but an enthralling wheel-to-wheel battle between title rivals Hamilton and Verstappen, ensured that this Brazilian Grand Prix weekend would be remembered for what happened on-track.
The third edition of the novel ‘sprint’ format saw qualifying pushed forward to the Friday and the traditional Saturday qualifying slot replaced by a sprint race, which was to determine the grid positions for Sunday’s race. Having initially secured pole position for the sprint race, Lewis Hamilton was subsequently disqualified and demoted to the back of the grid as his rear-wing was found to be in breach of technical regulations. Max Verstappen, who finished second, was also fined for inspecting said rear-wing whilst the car was in Parc-Fermé.
Charles Leclerc, meanwhile, had a disappointing qualifying. Out-paced by his teammate, he was forced to settle for a lowly eighth place. He sought to quickly rectify his error in the sprint race, overtaking Pierre Gasly and Lando Norris before going wide at turn four as he attempted to pass Sergio Perez. Having been overtaken once more by Norris, and ceding his position to a charging Hamilton who, having started at the back of the grid, ultimately finished in P5, Leclerc had to settle for P7. Hamilton’s woes were far from over, and a 5th-place grid-penalty demoted the Brit to 10th, whilst promoting Leclerc to 6th. Bottas, meanwhile, took the chequered flag with Verstappen in second.
In the race, Leclerc got off to a blistering start, overtaking both his team-mate and Norris, whose McLaren picked up a puncture before reaching turn one. Elsewhere, Verstappen jumped Bottas, and Hamilton once more fought his way through the field, overtaking all of his rivals with a sense of inevitability.
Having overtaken the rest of the field with relative ease, Hamilton came unstuck as he approached Verstappen. The Dutch driver, despite lacking straight-line speed, managed to maintain a consistent, albeit miniscule, one-second gap to Hamilton thanks to his pace in sector two. After 30 laps of wheel-to-wheel racing, which almost saw the two collide as both ran wide at one point, Hamilton completed the move on Lap 59, as Verstappen was helpless to defend from a Mercedes that was benefitting from a slipstream and DRS.
Hamilton saw out the victory and closed the gap on his title rival to a mere 14 points with three races remaining. Leclerc, meanwhile, having started strongly, had a lonely but efficient race as he secured his second consecutive P5 finish, further increasing Ferrari’s lead on McLaren.
Post-race Leclerc reflected on the importance of his strong start, saying, “That was a really nice race. I had a very good start, which was my first target. After that, the race was all about managing the tyres and maintaining the gap.”
He will be hoping to further solidify Ferrari’s 3rd place Constructors’ standing at the inaugural Qatar Grand Prix next weekend.