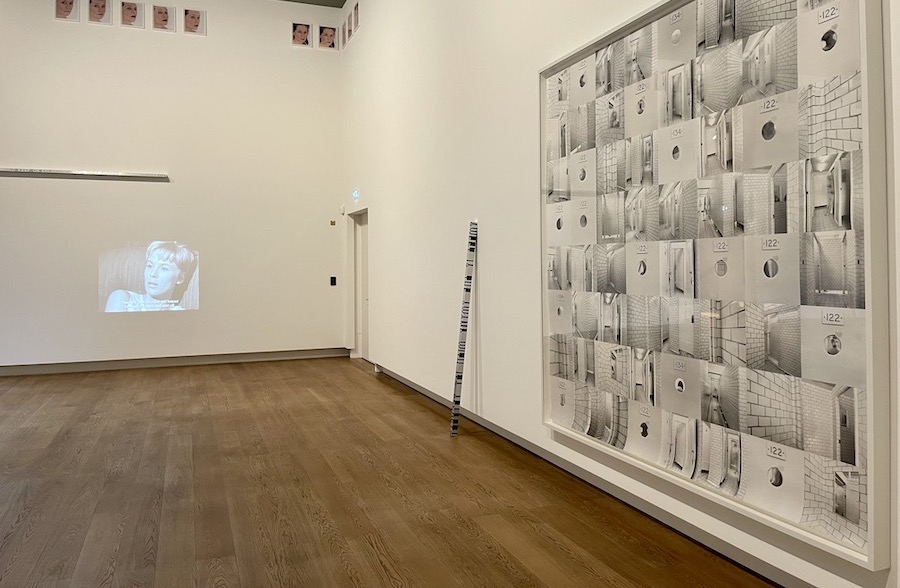 ‘Sweet is the swamp with its secrets’ is the opening line taken from a poem by Emily Dickinson, and as a title to this exhibition of Roni Horn’s work, it perfectly sums up what is hiding in the depths of the Hauser and Wirth gallery.

For the first time ever, Roni Horn’s photography and sculpture are presented alongside clips from Ingmar Bergman’s famous 1966 sexual drama Persona, her works interpreted through the prism of cinema by curator Jerry Gorovoy for an exhibition designed specifically for Hauser and Wirth Monaco.

“I am interested in Roni’s relationship to cinema both on a formal level and on a conceptual, content level,” says Jerry Gorovoy during a private tour of the exhibition. “The work tends to be more abstract and hermetic, but there’s an unconscious side to what she is doing that deals with sexuality and psycho-sexuality.”

Roni Horn is an American visual artist and writer who, at a very early age, decided that her gender “was nobody’s business”, as she said in a 2009 interview.

While words, literature and language are often coupled with Horn’s work, this exhibition proposes that images of the body, desire and sexuality – the ‘secrets of the swamp’ – are equally crucial to identity.

“Roni Horn has been interested in identity her whole life. Now, the idea of androgyny, of sexuality and people changing their sexual identity or physicality is much more common, but Roni’s been dealing with this for a long time,” says Gorovoy. “One of the things that defines who we are, really, is our relationship to sexuality. The Bergman film is quite famous, but it is also quite hard to figure out. Like Roni’s work, if you take all the typologies, it doesn’t end up at a narrative. Bergman himself said when you see this film, don’t try to make sense of it, just experience it.”

Gorovoy has selected six two-minute clips from the feature-length film, removed the audio and added subtitles. The clips display interactions between Elisabet, an actress who for some unknown reason suddenly refuses to speak, and Alma, the nurse who is assigned to her care.

The clown in ‘Cabinet of’ with its smeared red nose and lips can be read as a symbol of sexual arousal while revealing the relationship between identity, mask and performance. “These are two separate photographs that she’s cut and spliced together, like in film, to make one image. Here again we ask, is this the same person? Is this two people? It’s very ambiguous in a way.”

‘a.k.a.’, a series of self-portraits, charts Horn’s exploration of her androgyny to reveal the relationship between gender and performance and, like Bergman, the multiplicity and fluidity of identity.

“According to Freud, basic understanding comes down to passive and active more than male and female within the psychic life. In these pictures of Roni, you can see how her identity, the way she styles herself, is like a mask. Androgyny is a big part of Roni’s work because it’s not masculine or feminine, it’s inclusive of both sides of the psychic life.”

At the centre of the exhibition is a large cast-glass sculpture with its seductively glossy surface inviting the viewer to gaze into an optically pristine interior, as if looking down on a body of water.

Jerry Gorovoy says that both he and Roni are happy with the exhibition he has put together specifically for Hauser and Wirth Monaco. Gorovoy has already forged a connection with the Principality – as assistant to Louise Bourgeois for 30 years and now President of The Easton Foundation, he oversaw Hauser and Wirth’s inaugural exhibition by Louise Bourgeois, including the gaint ‘Spider’ sculpture in the gardens of Monte-Carlo, in 2021.

“I’ve never done anything like this before, the projection and all that. But I think it works,” concludes the curator. “The complexity of the forms and the images allow Roni’s work to be read in many ways, but this is my interpretation. Hopefully people agree. Roni has seen it and she is very happy. She said it’s even richer than she thought.”

‘Sweet is the swamp with its secrets’ runs until 24th of December. As with all Hauser and Wirth exhibitions, this chapter includes a series of events including a screening of the movie at the gallery, a talk, still life workshops with school groups and more.

Photo above by Monaco Life.