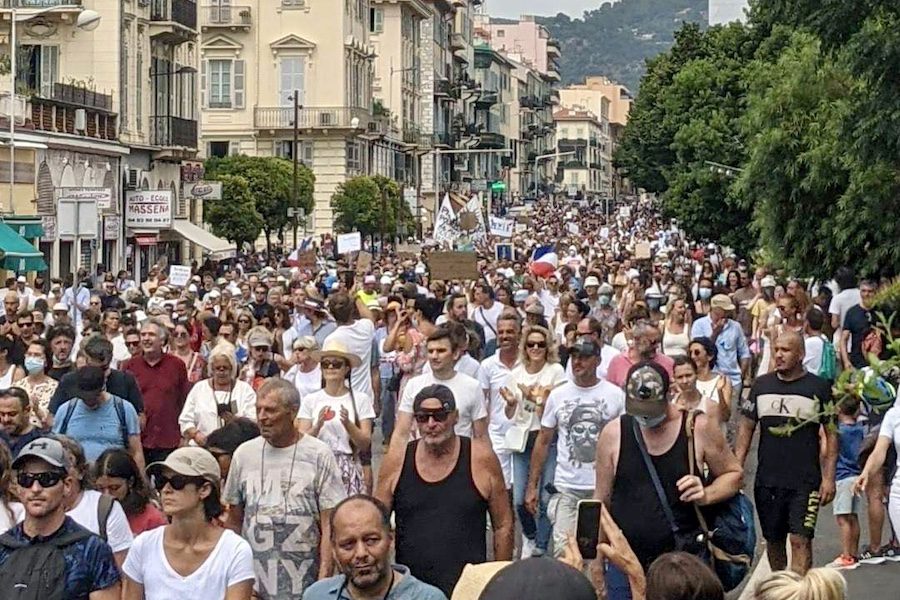 Despite nationwide protests, the French government has passed a divisive law that requires health care workers to be vaccinated and health passes to access restaurants, public transportation and other public sites.

More than 160,000 people took to the streets across France on Saturday, including in Nice, holding up signs saying “For Freedom” and “Rights and liberty in danger”. Many say they take issue on the mandate, not the vaccines themselves.

Regardless, President Emmanuel Macron’s government approved the law in the early hours of Monday morning, mandating Covid-19 vaccines for health care workers, to protect hospitals and avoid another lockdown.

The law also sets up a health pass for everyone in order to access restaurants and other public venues, as well as planes and trains.

The law has some concessions, namely that the dates have been pushed back to allow time for people to get their jabs.

Health care workers must get their first vaccination by 15th September or risk being suspended. This includes those who work in hospitals and with the elderly, as well as firefighters.

The August date remains for widespread use of the health pass, which must be presented by the adult public to enter restaurants, cafes, fairs, exhibitions, medical establishments and to use public modes of transport. By 30th September, this will extend to everyone 12 years of age and older.

Parliament will vote on whether to renew the mandate on 15th November.

To get the pass, people must prove they are recently fully recovered from the virus, have been double jabbed, or have a negative PCR test less than 48 hours old. Both digital and paper documents will be accepted.

For visitors to France, the government will soon release an outline of how to process health passes from other countries.

Another concession in the law is how it will be policed. Criminal sanctions will no longer be applied to establishments who fail to check health passports. Instead of a fine of up to €15,000 and a one-year imprisonment, there will now be civil sanctions including the closure of the venue.

Meanwhile, employees of venues that require a health pass cannot be dismissed if they refuse to be vaccinated or regularly tested, but will instead be asked to take annual leave and then unpaid leave, while remaining an employee of the company.

The legislation still needs to be approved by France’s highest administrative authority, the Constitutional Council, before becoming law.

Monaco: Stricter Covid rules to come into play from Saturday

Lifestyle & Wellbeing Cassandra Tanti - March 7, 2021
Around 250 people received their first Covid jab within a week, equivalent to 0.65% of the population. However, more than three quarters of all patients have now received their booster shot.

Lifestyle & Wellbeing Stephanie Horsman - December 7, 2021
As the circulation of Covid among school students continues its upward trend, France’s government has announced the return of some restrictions.