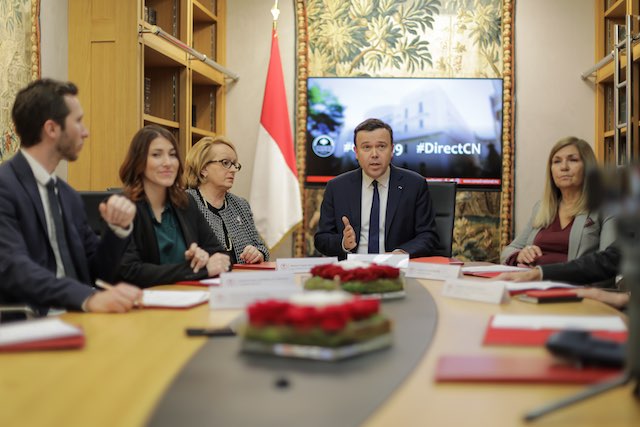 The National Council is asking the government to introduce additional measures to protect the Principality and its economy amid the Covid-19 epidemic.

On Wednesday 11th March, members of the National Council, including President Stéphane Valeri, spoke to the press regarding the Covid-19 situation in the Principality. The Council members called for “national unity and the establishment of health, social and economic measures to meet the current and potential challenges of this event.”

Stéphane Valeri spoke first and wanted to make clear that elected officials were on the case. He spoke of the establishment of a “restricted cell” for information sharing between the Council and the government.

Councillor Corinne Bertani called for procedures to protect populations at risk and in particular of senior citizens. She recommended the immediate introduction of new measures for the Rainier III Centre, Cap Fleuri, Qiétudine, and Hector Otto Foundation, including nominal control of entrances to ensure that visitors from risk areas do not enter, as well as the “exceptional use” of telemedicine, if necessary, to prevent the possibility of infection caused by waiting rooms.

As far as cancellations of events and school closures, Councillor Marc Mourou stated that the changing situation meant that no concrete answers could or would be given. If the severity of the situation warrants closures and cancellations, the government and council are reserving the right to do so for the greater good of the population, despite having damaging consequences for Monaco’s economy.

Human resources management was also touched upon. “Last night we insisted, with the Government on the development of telework which must be generalised as much as possible,” Councillor Karen Aliprendi-de Carvalho said. “Companies must all be better informed, by all means, at least by personalised mail, of this new possibility of a simplified procedure.

She went on to reiterate that the current bilateral social security convention agreements between Monaco and French authorities that say telecommuting can be done only three days per week be curtailed for the short term until the crisis passes and that Italian workers be given telecommuting options when possible.

Balthazar Seydoux spoke of the economic impact. “We have asked the Government to take all accompanying and support measures in an urgent and operational manner in real time.”

Amongst measures asked for by the Council are:

• Establishment of a dedicated cell with a call number and a clearly identifiable manager.

• Postponement of payment of social charges.

• Establishment of a zero-rate loan to support businesses in financial difficulty.

He went on to reassure businesses and employees that the Council is behind them, saying: “Indeed, if Monaco was able to face a construction crisis like the Jardins d’Apolline by unlocking more than €80 million via a special account of the Treasury (€55 million to rehabilitate a building barely five years old, and €30 million for the temporary rehousing of tenants), so we can and must do it also to help the companies affected by this crisis. These special treasury accounts already exist, they are called ‘various loans, economic interventions’, but we could also create one specially dedicated to the management of this crisis.”

There was a call for the Prince’s Government and the National Council to be a united front working toward the same goals by allowing information to be shared between the entities. No less than once a week they will meet to discuss elements relating to the handling of the situation in terms of public action. This is hoped to create a unified, rational, and effective public communication system.

Stéphane Valeri concluded by reassuring the public of the government’s commitments to protect the population. “In summary, prepare today for the transition to phase 3 of the epidemic, especially in medical and hospital matters,” said Mr Valeri. “To the emergency situation experienced by many economic actors, Monaco must provide urgent solutions. We ask that precise decisions be taken and that aid be released in real time, commensurate with the difficulties encountered, and the economic and social challenges for our country.”