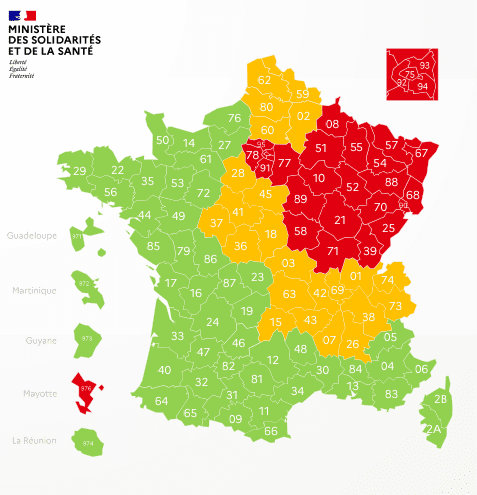 France’s Prime Minister has confirmed that Monday 11th May will mark the beginning of the country’s “progressive” exit from lockdown, saying that bars and restaurants may open from early June in “green” areas including the French Riviera.
Édouard Philippe gave a televised address on Thursday afternoon, detailing his government’s plan for easing Covid-19 lockdown measures after nearly two months of confinement for the population.
The country has made enough progress in slowing down the spread of the virus and reducing strain in hospitals to gradually return to normal, Prime Minister Edouard Philippe said.
“From Monday we will progressively unwind the lockdown that started on 17th March… but the country is cut in two, with the virus circulating more quickly in some regions, notably in the Paris region, which is very densely populated,” he said.
The minister was referring to the map of red and green areas that details the difference in the local level of the spread of the virus and the pressure on hospital’s intensive care units.
“In the Paris region, the infection rate is falling slowly, but it remains very high, higher than we expected. That is why in these territories we will need to be extra vigilant.”
Beyond the Paris area, administrative regions around Calais, Strasbourg and Dijon will also remain classified as “red zones”, where some restrictions will remain – such as keeping parks, gardens and secondary schools shut.
In other parts of France – including the French Riviera – secondary schools, cafes and restaurants may open from early June if the infection rate remains low, Philippe said.
As of 11th May, people in France – or those travelling through France – will be allowed to move freely in an area of less than 100 kilometres from their home.
The interior ministry will publish a new attestation for travel purposes to ensure that this rule is upheld.
From this date, everyone over the age of 11 must wear a mask on public transport or face a fine of €135.
The coronavirus pandemic has killed almost 26,000 people in France since 1st March, though the number of new hospitalisations and ICU cases has fallen steadily in recent weeks.

Picture: Map of France and the active circulation of the virus according to departments, as of Wednesday 6th May