Crackdown on the unvaccinated in France and Italy

Crackdown on the unvaccinated in France and Italy 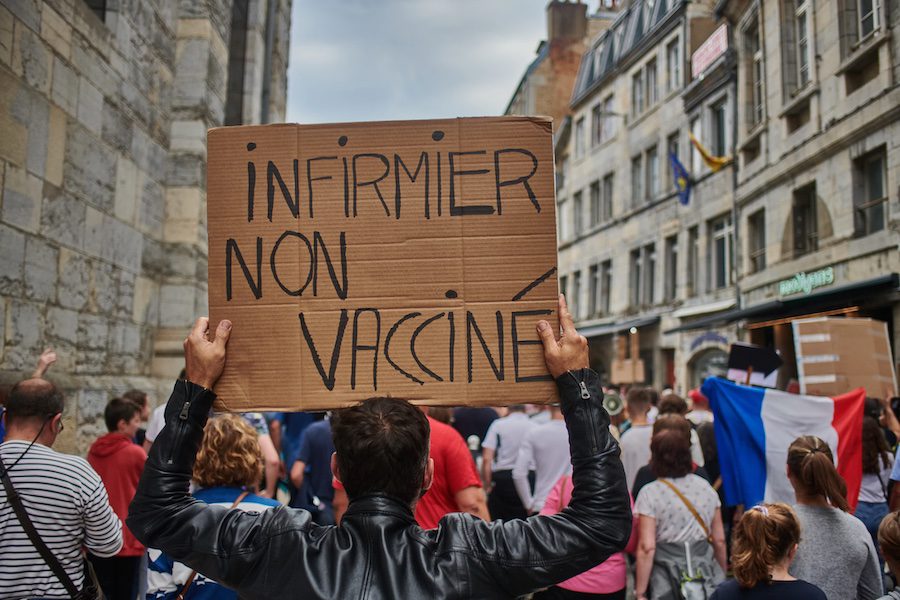 The French National Assembly has approved a controversial Covid vaccine pass, set to replace the current health pass, ostensibly barring the unvaccinated from many daily activities, whilst the Italian government has made it mandatory for all people over 50 to be vaccinated.

After three turbulent days of debate, the MPs of the French National Assembly broke up at 5:25am Thursday morning, giving the green light to switch from a Covid health pass system to a vaccination pass.

The new pass will disallow the unvaccinated aged 12 years and over from taking part in certain activities, using public transportation, or entering bars and restaurants. A negative Covid test will no longer be sufficient, except to enter health care facilities. President Emmanuel Macron has been a proponent of the measure, reportedly saying he wanted to “piss off” those who remain unvaccinated.

The National Assembly bill, despite the heated debates, passed handily with 214 for it, 93 against and 27 abstentions. The bill now goes to the Senate to be voted on.

The hoped-for date of 15th January to make this measure law may be a bit of a pipe dream, as the conservative Les Republicains party has vowed to pass it on to the Constitutional Council for review to determine whether it is the correct legal balance between public health and personal freedom.

The vote came as the French reported an eye-watering 332,252 new Covid cases in a single day on Wednesday.

Meanwhile, in Italy, the government has made it compulsory for people over the age of 50 to be vaccinated, effective immediately. This group will join health workers, police and teachers, who are also legally required to be vaccinated.

The decision came as an effort to take pressure off hospitals and to lower the death toll as case numbers dramatically rise. On Wednesday, 189,109 new cases were reported, up from 170,823 the previous day.

This is one of Europe’s toughest vaccination mandates, and was supported universally by ministers, despite party infighting.

Italy was the hardest hit European nation in the first wave of the pandemic, and the memory of those terrifying days remains as the number of fatalities begins a not-so-slow rise. 231 deaths were reported Wednesday, bringing the total number of victims to 138,276, a grim statistic that is second only to Britain’s.

Roberto Speranza, the Italian Health Minister, has stated that two-thirds of those in intensive care were not vaccinated, as were half those in regular hospital wards.

“We are making these choices in order to restrict the unvaccinated as much as possible, as this is what is causing the burden on our hospital system,” Speranza said to the Italian media.

Prime Minister Mario Draghi was also keen to see the measure introduced, and despite delays, was able to push it through.

“We want to slow the growth of the infection curve and push Italians who are not yet vaccinated to get vaccinated,” Draghi said in a cabinet meeting, according to news agency Ansa. “We are targeting the age groups which are most at risk of hospitalisation in order to reduce pressure on hospitals and save lives. At the same time, we want to keep schools and businesses open.”

Italy has also tightened measures for the general population. From Monday, people will need to be fully vaccinated or to prove recovery from Covid in order to go to restaurants, to the gym or to use public transport.

Austria has made vaccination obligatory for over 14s starting in February and Germany is seriously looking at making jabs mandatory for adult.

Photo by Jordan Bracco on Unsplash