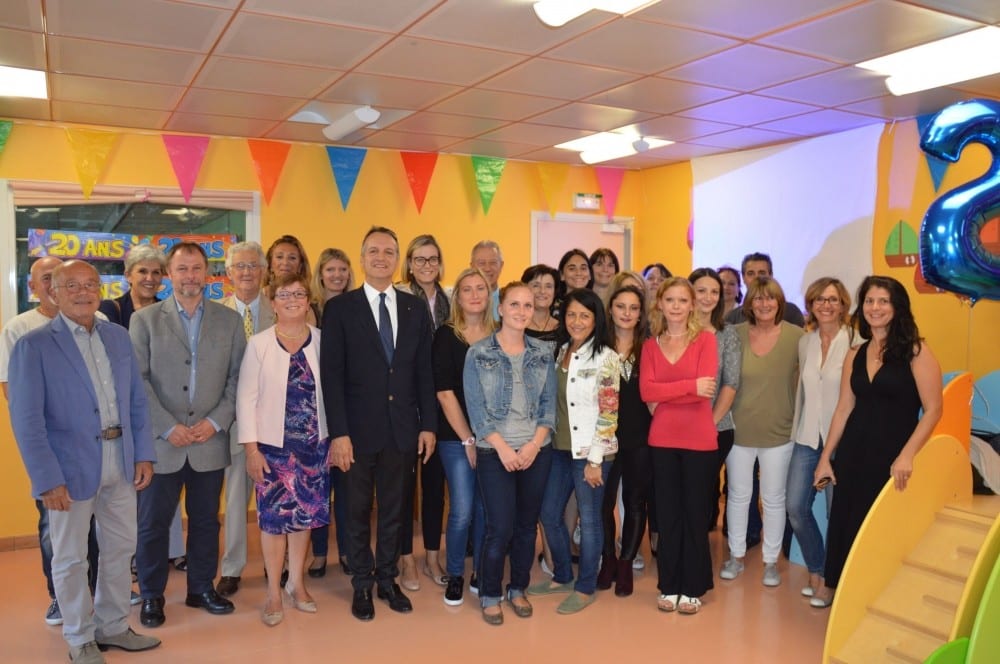 The Monaco City Council held a reception on Thursday, September 21, to celebrate the 20th anniversary of the Crèche de Monte-Carlo.

The crèche opened its doors in the Saint-Charles complex on July 1, 1997, welcoming its first 36 children. The premises of more than 800m2 saw their area increase by 200m2 – and 1300m2 of covered terraces – in 2013 with the transfer of the Daycare to Larvotto, increasing the capacity of the nursery by 15 places.

Today, the Crèche de Monte-Carlo welcomes 51 children daily, under the watchful eye of its director, Nicole Baron,who has served since the opening of the establishment. Ms Baron was warmly congratulated by the Mayor for her work and her involvement over the years.

As a reminder, the Crèche de Monte-Carlo was the first municipal facility to welcome young children before the transfer of skills between the Foyer Sainte-Dévote and the Town Hall. From January 1, 2004, the management of nurseries in the Principality has been centralised and officially entrusted to the Municipality.

The Crèche of Monte-Carlo is one of eight community day nurseries run by the Early Childhood section of the Social Action Department of the Town Hall, which also organises and coordinates other institutions and services for early childhood care under municipal management, namely the Family Crèche with fourteen nursery assistants, the Mini-Club, during the months of July and August, and micro-crèches A Ribambela, A Riturnela and, from early September, A Farandola.

Security in place for celebrations of Saint...

Photo: Facebook Mairie de Monaco[/caption] Various security measures will be put in place for public access to the Saint Devote celebrations at Place Sainte Devote on Friday, January 26. For those wishing to join the procession that will leave from Quai Louis-II, three checkpoints will be set up with visual checks of bags and their contents: at the “tabac” turn, end of route de la Piscine; on Quai Louis-II, between the Nautical Society and the Yacht Club; and on boulevard Louis II, at 1 Quai Kennedy. For those wishing to go to Place Sainte Devote, three checkpoints will be set up: at the bottom of avenue Ostend; rue Grimaldi, at the entrance to the Sainte Devote Gallery; rue Grimaldi at the bus stop for VIPs. SNCF travellers should note the closure of the Sainte Devote valley to pedestrian traffic from 5:30 pm. To reach or leave the station, take the Sainte Devote gallery. [caption id="attachment_27220" align="alignnone" width="640"]

Photo: Facebook Mairie de Monaco[/caption] From 5 pm to 7:15 pm, the Route de la Piscine will be closed to traffic except for the portion between La Rascasse and the central wharf; from 5:30 pm to 7:15 pm, the area between avenue JF Kennedy and 1 boulevard Louis II will be closed to traffic during the passage of the procession at the bottom of the avenue of Ostend, and traffic will be momentarily stopped on the avenue to allow the passage of the participants in complete safety. There may be slight delays to bus services as the procession crosses between 6 pm and 7 pm. The Monaco bus line No 1, from Monaco Ville, will be diverted towards avenue d'Ostende and subsequent stops will not be served, from 5:30 pm until 7:15 pm. The administration asks road users to avoid the area between the Saint Devote church and avenue President JF Kennedy from 6 pm until 7 pm and apologises in advance for any inconvenience caused by the festivities.